Quantized vortices play a pivotal role in the interpretation of quantum phase transitions and strongly correlated physics involving the underlying confluence of superfluids, Bose-Einstein condensates, and superconductors, thus it is crucial to study quantum vortices and their applications. Exciton polaritons are quasiparticles formed by the strong coupling between excitons and photons in semiconductors, supporting macroscopic quantum phenomena such as non-equilibrium Bose-Einstein condensation, superfluidity, and quantum vortices, and are considered to be quantum fluids of light which is a novel platform for studying quantum vortex and its application. The previous realizations of quantum vortices are performed in extremely low-temperature systems such as ultracold atoms, and the vortex position is random and uncontrollable, which remains the challenge to the research of quantum vortex lattices and their possible applications at room temperature.

The research team clearly revealed the complete three-dimensional band structure of the Kagome lattice, including the massless Dirac energy band and the kinetic energy quenched flat band, by an energy-momentum-resolved fluorescence spectroscopy system. Above the critical threshold, considerable polaritons spontaneously condense on the Dirac points and flat bands of the lattice to form a coherent lasing. The real-space and momentum-space distributions of condensates both prove that the system possesses long-range order and coherence.

In two pivotal quantum states, i.e., the flat band and the Dirac point, the researchers demonstrated ordered vortex lasing arrays and non-vortex lasing, respectively. The topological cores and spatial configurations of such vortices can be tuned by laser energy. The configuration of the quantum vortex array intuitively reflects the interaction between the phase of the polariton and the lattice geometry, suggesting that the formation of the flat band and the quenching of the kinetic energy of the polariton are closely related. The research results provide a promising room-temperature system to explore quantum simulation and develop novel topological photonic devices and light sources. 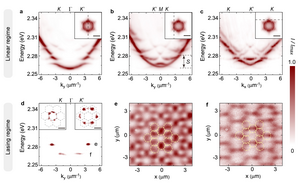 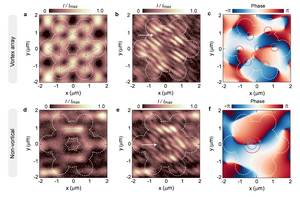