Tokyo, Japan – A team led by scientists from Tokyo Metropolitan University have created unprecedentedly lightweight optics for X-ray space telescopes, breaking the traditional trade-off between angular resolution and weight. They used Micro Electro-Mechanical System (MEMS) technology, creating intricate patterns into silicon wafers that could direct and collect X-rays. By annealing and polishing, they realized ultra-sharp features that could rival the performance of existing telescopes for a fraction of the weight, costing significantly less to launch.

X-ray astronomy provides a vital tool which helps scientists study and classify the wide range of celestial bodies which emit and interact with X-rays, including our planet. But there’s a catch: most X-ray radiation is absorbed in our atmosphere, meaning that telescopes and detectors have to be launched into space. With this comes a whole range of limitations, in particular, how heavy the device can be.

One of the key features of all astronomical observation optics is its angular resolution, or the angle that two light sources can make with a detector and still be told apart. The problem with conventional X-ray optics is that, to reach higher resolutions, devices get heavier and heavier. This makes launching them into space very costly. Even for the Hitomi telescope launched in 2016, considered groundbreakingly light, the effective weight was 600 kg per square meter of effective area.

Now, a team led by Associate Professor Yuichiro Ezoe and Aoto Fukushima have broken this trade-off by engineering a high-performance unit weighing only 10 kg per square meter. They used Micro Electro-Mechanical Systems (MEMS) technology, a technique designed to make microscopic mechanical actuators, to pattern sharp, intricate designs into silicon wafers which can direct and collect X-rays. The design itself follows the Wolter I geometry of existing X-ray telescopes, a concentric array of tree-ring-like slits which can nudge X-rays entering via a narrow range of angles and collect them to a point. What’s unique about the team’s work is how they refined the patterning itself. After etching the slits using a technique called deep reactive ion etching (DRIE), they found that there was a surface roughness to the patterns that could smear out the collection of X-rays, effectively decreasing the resolution. So, they “annealed” the pattern, applying heat in a special device for unprecedentedly long times. With progressively longer annealing, the silicon atoms at the surface of the patterns were able to move about more, rounding out any roughness and improving the angular resolution of the telescope. This was followed by grinding and chemical polishing to straighten out the rounded edges of the slits themselves.

Importantly, the performance reported by the team matches that of telescopes which are already in action. Its weight makes it particularly suitable for the GEO-X mission, a satellite designed to visualize the magnetosphere of the Earth. The team are aiming for the staggeringly low total weight of 50kg, a technological breakthrough which may see future missions sent into orbit at incomparably lower cost. 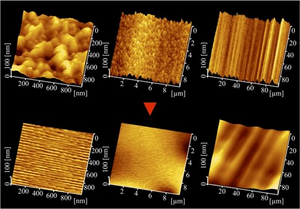 Effect of annealing on surface roughness. 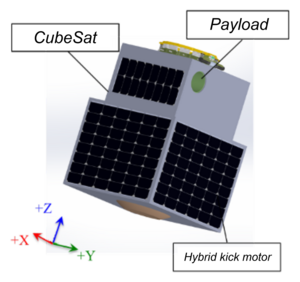 Schematic of the GEO-X satellite.