In 2015, the United Nations put forth 17 Sustainable Development Goals that aim to transform the world and envision a more sustainable future for all its inhabitants. Despite their adoption, conflict, abuse, and injustice continue to run rampant in the world in 2022. The agenda of Sustainable Development Goal 16 (SDG 16), which talks of resolving the challenge around ‘Conflict, insecurity, weak institutions and limited access to justice,’ is perhaps the most relevant goal to achieve in order to promote a peaceful and inclusive society and provide equal access to justice to all.

RELX, a global provider of information and analytics for professional and business customers across industries, hosted their ‘Free Virtual SDG Inspiration Day’ on May 9, 2022. The primary topics discussed during the session was the role of businesses in furthering the agenda of SDG 16. The event gave a shared platform to thought leaders, corporate representatives, investors, government, and NGOs to explore issues with practical engagement and ideas.

The free-to-attend event was the eighth of its kind, with previous Inspiration Days being held in London, Silicon Valley, Amsterdam, Delhi, and virtually. Organizations that partnered the event included the Ban Ki-moon Centre for Global Citizens; UN Global Compact Network UK; Global Citizen, the World Humanitarian Forum; the Responsible Media Forum; Schneider Electric; The Elsevier Foundation, and the LexisNexis Rule of Law Foundation.

“All around the world, armed conflicts are causing humanitarian emergencies in countries such as Yemen, Syria, Afghanistan, Ethiopia, and Ukraine. The climate crisis and COVID-19 are further increasing the violent conflicts. We are at a turning point, and we must choose peace,” encapsulated Secretary Ban Ki-Moon in his opening keynote address.

Several speakers touched upon the Russia-Ukraine conflict in their speeches. Dr. Heinz Fischer commented, “We must admit that war, migration, and human rights abuses have been part of human history. The significance and relevance of the SDGs will survive the ongoing war between Russia and Ukraine and will thrive after the war – particularly SDG 16.” Former Director-General of UNESCO Irina Bokova said that the COVID-19 pandemic, the war in Ukraine, and impact of food production due to climate change have impacted the 2030 SDGs, and SDG 16 in particular. “SDG 16 is about peace. It's about multilateralism, it's about strong institutions, both nationally and internationally, it is about justice. With all the threats and challenges that we see nowadays, we need to reconfirm the SDGs and look at them from the purpose of human well-being,” she said.

During the discussions, the speakers came to the consensus that there was always more a government or a business could do to support an NGO – not just financially, but through corporate volunteering, charity, and opportunities to join panels such as the current one, as these relationships support NGOs in the long-term.

The panel discussed that gender equality was not just a woman’s issue; it is a societal issue, and everyone should be engaged in equal measure. “Men and women working together in the spirit of partnership, to make a difference in terms of gender equality, and the outcomes of institutional processes,” they said.

To learn more and watch the entire event, click here. 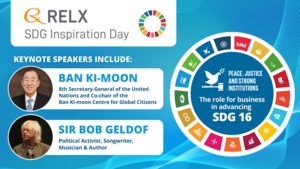