Water fleas are masters of adaptation. Researchers from Ruhr-Universität Bochum (RUB), the Albert-Ludwigs-Universität Freiburg and the Technical University of Darmstadt have discovered that they can defend themselves not only against animals but also against carnivorous plants. They showed that water fleas swim more slowly and develop lateral spines in the presence of the aquatic plant Utricularia (bladderworts). It seems that both mechanisms make it more difficult for the carnivorous plant to suck them into its trap. The team headed by Dr. Sebastian Kruppert, Dr. Martin Horstmann and Professor Ralph Tollrian from RUB, in collaboration with Professor Thomas Speck from the Freiburg Botanical Garden and Simon Poppinga from the Technical University of Darmstadt describe their findings in the International Journal of Molecular Sciences, published online on 9 June 2022.

The traps of the water plant Utricularia are triggered by movement. They suck in prey within a few milliseconds and digest it. One plant can both form many traps and catch several animals in one go. “This creates a very high feeding pressure,” point out Simon Poppinga and Thomas Speck. The researchers from the three universities were interested in finding out whether the water fleas defend themselves against such attacks by plants.

In the first step, they looked for natural habitats where plants and water fleas live side by side. They found what they were looking for in Gelsenkirchen. The team isolated several individuals from the wild and tried to reproduce them in the lab. Water fleas are parthenogenetic: they produce genetically identical offspring, i.e. clones of themselves. The clonal line with the designation “04” was easy to cultivate. Because of its geographical proximity to the Schalke 04 football stadium, the researchers named it S04.

Plant’s presence in the water results in longer appendages

The researcher cultivated S04 together with the aquatic plant in the lab, initially separated by a fine grid. They thus ensured that the animals couldn’t come into direct contact with the plant and weren’t in danger of being eaten – but they could sense the presence of the predator via chemical messengers. Water fleas that lived under such conditions formed longer appendages on their carapace and were smaller.

In addition, the researchers measured the swimming speed. Water fleas that lived in the presence of the plant moved more slowly than those that grew up without the plant. If the animals had a choice, they avoided the proximity of the water plants. “This shows that the otherwise genetically identical animals only activate defences when they need them because they grow up side by side with the plants,” says Sebastian Kruppert.

This change in behaviour and the adaptations in body structure proved effective. The team compared how often animals that had grown up without the plant were eaten compared to animals that had been exposed to the plant. In fact, the latter were eaten less frequently. “This indicates that the activatable adaptations are actually defences against the plant,” concludes Sebastian Kruppert.

“We assume that the appendages let the water fleas grow wider than the diameter of the suction trap entrances,” as Martin Horstmann describes the process. “The traps are different sizes, but the smaller traps at least can no longer ingest the animals.” Since the water fleas with defences are also slimmer, the water current can probably flow past them more easily. Moreover, the slower swimming movements probably trigger the traps less often.

“We hadn’t been aware of any other case where animals can defend themselves against attacks from plants,” as Ralph Tollrian outlines the special nature of the discovery. “The fact that various defences such as behavioural adaptations and changes in body structure can simultaneously be observed shows how adaptable and fascinating these tiny animals are.”

A video of the plant catching prey can be viewed online.

Facing the green threat: A water flea’s defenses against a carnivorous plant

This is how water fleas defend themselves against carnivorous plants 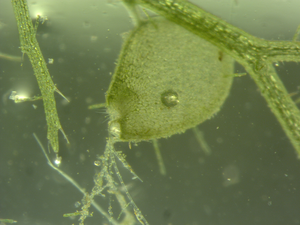 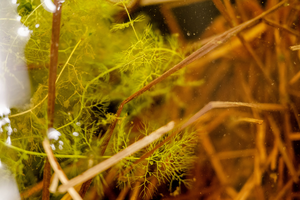 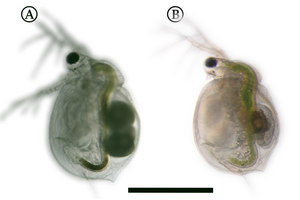 Water flea with and without defences 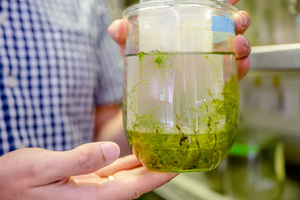