LA JOLLA—(July 13, 2022) Researchers at the Salk Institute and King Abdullah University of Science and Technology (KAUST) in Saudi Arabia have discovered a new underlying cause of Wiskott-Aldrich syndrome, a rare genetic disease that leads to bleeding and immune deficiencies in babies. Their findings, published in the journal Nature Communications on June 25, 2022, revolve around how cells cut and paste strands of RNA in a process called RNA splicing. The genetic mutations associated with Wiskott-Aldrich syndrome, they found, disrupt this process which, in turn, prevents numerous immune and anti-inflammatory proteins from being made correctly.

“This study not only suggests new targets for treating Wiskott-Aldrich syndrome with small molecule drugs, but also sheds new light on the basic biology of RNA splicing, an important and not fully understood process,” says co-corresponding author Juan Carlos Izpisua Belmonte, a professor in Salk’s Gene Expression Laboratory and holder of the Roger Guillemin Chair.

Babies with Wiskott-Aldrich syndrome begin to develop symptoms quickly after birth: itchy, scaly rashes, frequent bruises and nose bleeds are some of the first signs. Over time, they become prone to infections and are more likely than other children to develop autoimmune diseases and cancers. The only potential cure is a bone marrow transplant, which carries a host of complications and only works in some children.

Scientists have long known that Wiskott-Aldrich syndrome is caused by mutations in a gene on the X chromosome; the gene and the protein it encodes were named WASP after the syndrome. The WASP protein is found throughout cells in the blood and immune system, and one of its functions is to maintain these cells’ cytoskeletons, the microscopic networks of proteins that give cells their shape and organization. But changes to the cytoskeleton couldn’t explain all the symptoms.

Former Salk Postdoctoral Fellow Mo Li, now the head of KAUST’s Laboratory of Stem Cell and Regeneration, and Izpisua Belmonte wondered if WASP plays other roles—particularly in the nuclei of blood and immune cells, where genetic material is stored and processed.

To find out, they removed the WASP gene from stem cells and coaxed the cells to become macrophages or B cells, two types of immune cells impacted by the disease. They also collected cells from two patients with Wiskott-Aldrich syndrome and generated induced pluripotent stem cells (iPSCs) containing the disease-associated mutations in WASP. Then they compared the altered cells to normal macrophages and B cells.

“These are powerful models that can help us understand how WASP functions and what the underlying cellular mechanisms of Wiskott-Aldrich syndrome are,” says Li.

Immune cells lacking WASP, or containing mutations in the WASP gene, appeared different right away; there were many more clusters—known as nuclear speckles—in the centers of diseased cells. For a protein to be produced by a cell, the DNA encoding it is first transcribed into a strand of RNA. Often, this initial strand contains more genetic material than is needed; this is where RNA splicing comes in. Proteins in nuclear speckles cut and paste bits of the initial RNA strand into its final instructions for a protein.

“When we saw differences in the nuclear speckles of these cells, this is the first time we realized that WASP might be involved in RNA splicing,” says Baolei Yuan, a KAUST graduate student and first author of the new paper.

The researchers also showed that many proteins related to RNA splicing were present at higher levels in the cells lacking WASP or with mutations in WASP. WASP both controlled the production of these RNA-splicing factors and directly played a role in RNA splicing itself. The team pinpointed thousands of other genes with altered RNA splicing—many were related to inflammation, autoimmunity and cancer.

“These RNA splicing factors could both be a biomarker for monitoring Wiskott-Aldrich syndrome, and a potential target for treatment,” says Izpisua Belmonte.

More work is needed to understand exactly how WASP is splicing RNA, as well as which symptoms of Wiskott-Aldrich syndrome are associated with the abnormal RNA splicing seen in diseased cells.

Izpisua Belmonte is currently Institute Director of Altos Labs Inc., in addition to being a professor at the Salk Institute. 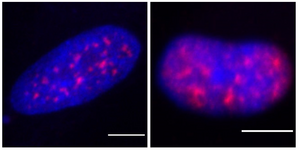