Light-induced ionization Light-induced ionization of polar liquids such as alcohols generates free electrons. After generation, an electron localizes on an ultrafast time scale, forming a so-called solvated electron surrounded by a cloud of several thousand alcohol molecules. Upon localization, strong coupled oscillations of the electron and its cloud are triggered, which persist for tens of picoseconds and radiate terahertz waves, thus markedly changing the electric properties of the liquid.

Ionization of molecules in a liquid by light is a basic physical process generating a negatively charged free electron and a positively charged parent ion. After its birth by ionization, the free electron undergoes a fast relaxation within 1 ps (1 ps = 10-12 s), by which it loses energy and eventually localizes at a new site in the liquid, surrounded by a cloud of electrically neutral solvent molecules. In a polar liquid, such molecules have an electric dipole moment, due to positive and negative partial charges within their molecular structure. In the solvent cloud around an electron, hydrogen atoms of the OH groups of alcohol molecules tend to point toward the electron, in this way screening its electric field. The screening cloud consists of several thousand alcohol molecules and has a diameter of some 10 nm (1 nm = 10-9 m). The localized electron together with its screening cloud displays quantum states at discrete energies and a broad optical absorption band.

Researchers at the Max Born Institute have now studied the ultrafast response of solvated electron in alcohols at terahertz (THz) frequencies (1 THz = 1012 Hz). Electrons were generated by femtosecond optical ionization of alcohol molecules and their response was mapped by an ultrashort THz pulse transmitted through the excited liquid. As reported in the recent issue of PNAS Nexus (https://doi.org/10.1093/pnasnexus/pgac078), they observed a novel type of excitation of the electron and its screening cloud of alcohol molecules, a so-called polaron. Collective oscillations of the electron and the solvent cloud arise at terahertz (THz) frequencies (1 THz = 1012 Hz), impulsively triggered by the ultrafast electron localization and persisting for tens of picoseconds. The oscillation frequency between 0.2 and 1.5 THz depends on the electron concentration and the THz dielectric response of the particular alcohol.

The concerted motion of the electron and the cloud of polarized alcohol molecules represents a complex superposition of polaron quantum states which is nonstationary and modulates the electric properties of the liquid periodically. Due to its electric dipole moment, the oscillating system radiates a THz wave, which is detected in the experiments. The polaron oscillations are illustrated in Fig. 1 and essentially consist in a radial motion of the spherical electric charge density around the electron as sketched in panels (+), (0), and (-). The movie gives a qualitative impression of what’s going on in the liquid. Its left panel shows alcohol molecules with OH groups in red, fluctuating around a solvated electron (green sphere). The spatial correlations between oscillating molecules become visible after spatially averaging the microscopic electric charge density as shown in the right panel of the movie. The collective spherical charge-density oscillations experience almost no damping because of their weak coupling to other types of excitations in the liquid.

The polaronic response discovered here is characteristic for a larger range of polar liquids, including water. The frequency of polaron oscillations can be tuned via the electron concentration and their weak damping allows for a manipulation of the underlying quantum dynamics, e.g., by interaction with a sequence of tailored ultrashort light pulses. In this way, the THz response of polar liquids becomes amenable to external control. 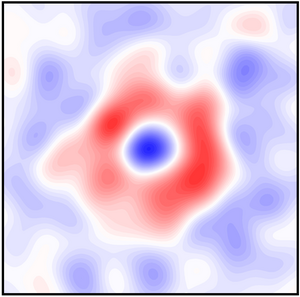 Cartoon of fluctuating alcohol molecules around a solvated electron