A new analysis explores relationships between domestic cats’ hormone levels, gut microbiomes, and social behaviors, shedding light on how these solitary animals live in high densities. Hikari Koyasu of Azabu University in Kanagawa, Japan, and colleagues present these findings in the open-access journal PLOS ONE on July 27, 2022.

Most feline species display solitary and territorial behavior, but domestic cats often live in high densities, raising the question of what strategies cats use to establish cohabitating groups. Social behaviors of cats can be influenced by hormones and the mix of different microbe species living in their guts—known as the gut microbiome. Studying these factors could help illuminate the group dynamics of cohabitating cats.

In that vein, Koyasu and colleagues conducted a two-week-long study of three different groups of five cats living together in a shelter. They used video cameras to observe the cats’ behavior, measured hormone levels in their urine, and collected feces to evaluate the mix of microbial species in the cats’ microbiomes.

Statistical analysis of the data revealed that cats with high levels of the hormones cortisol and testosterone had less contact with other cats, and those with high testosterone were more likely to try to escape. Meanwhile, cats with low cortisol and testosterone were more tolerant in their interactions with other cats. The researchers also found greater similarity of gut microbiomes between cats who had more frequent contact with each other, and they found links between the gut microbiome, social behavior, and cortisol levels.

The researchers outline possible directions for future research to further deepen understanding of cohabitating cat dynamics, such as a follow-up study that observes cats for several months, rather than just two weeks, and investigations to tease out causal relationships between hormones and social behaviors.

The authors add: “Low testosterone and cortisol concentrations in cats enabled them to share the space and live together, but the higher the oxytocin, the less affiliative behavior with others and the more lonely they are. The function of oxytocin was different from that of affinity for a group-mate. Cats may not consider other individuals living in the same space as tight relationship group-mates.”

In your coverage please use this URL to provide access to the freely available article in PLOS ONE: https://journals.plos.org/plosone/article?id=10.1371/journal.pone.0269589

Funding: This work was supported by the Japan Society for the Promotion of Science and Grants-in-Aid for Scientific Research from the Ministry of Education, Culture, Sports, Science, and Technology of Japan (Grant numbers: #20J14760 to H.K., 23 #18H02489 and #19K22823 to M.N., and #19H00972 to T.K.). The funders had no role in study design, data collection and analysis, decision to publish, or preparation of the manuscript. 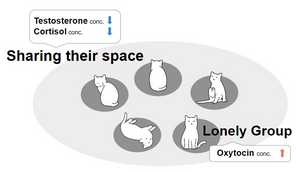 A graphic summary of the results from the study.