In recent years, LaAlO3/SrTiO3  interface is found to be an ideal host for two-dimensional electron gas (2DEG). Such heterostructures have attracted extensive interests in recent years due to their various fascinating properties such as high electron mobility, superconductivity, and tunable spin-orbit coupling effect.

However, the driving physical mechanism behind such fancy effect is still in debt. The most common theory for the 2DEG formation is the so called ‘polar catastrophe’ model, where 2DEG is attributed to the polar discontinuity between the two materials. Yet, recent reports of 2DEG on SrTiO3 bare surface revealed the importance of oxygen vacancies in the 2DEG formation process, while those defects at the buried interface are beyond the applicable range of traditional charactering methods.

The authors of this article address one of the most debated conundrums in SrTiO3  (STO) based heterostructures: the conflicting magnitude of the electron density of the 2DEG in experiments and the so called ‘polar catastrophe’ model. This conclusion is based on the local and time-resolved photoemission study of the oxygen vacancies influence for the 2DEG of an STO based heterostructures.

In more detail, they succeeded in controlling the density of the 2D electron gas (2DEG) of the LaAlO3/SrTiO3  interface by generating Ti-Sr anti-site defects in the SrTiO3  layer which create localized nano-regions in the buried interface. Using time-resolved and energy-resolved photoemission electron microscopy, they provide substantial evidence that oxygen vacancies are induced near those polar sites, resulting in an increased carrier density of the 2DEG. Crucially, the relative strength of these electron sources is directly linked to the oxygen vacancies at the interface offering a unique possibility to control the 2DEG of such semiconductor heterostructures. Their results prove that the electron density of the 2D electron gas is attributed to more than one mechanism which hence reveals the coexistence of various electrons sources at the LaAlO3/SrTiO3  interface.

Such finding will lay the foundation for promoting the implementation of novel electronic devices based on SrTiO3-related 2DEG. In particular, the design guidelines to control the electron density of 2DEGs of polar-nonpolar interfaces will set the stage for exploring more exotic phenomena of the 2DEG in device concepts such as superconductivity or magnetism of 2DEG.

The “femtosecond-nanometer space-time resolved optical experimental system” directed by Prof. Qihuang Gong is aimed to develop next-generation microscopy techniques with ultra-high resolution in order to better image the micro world. Photoemission electron microscopy developed by the research group has reached the first class in the world in its current status.

The group of Prof. Martin Aeschlimann is the leading team in ultrafast laser and surface physics. They are devoted to the investigation of ultrafast phenomena in solids, thin films and nanoparticles. This includes the combination of short pulsed laser systems with surface science technology in order to develop novel methods for measuring ultrafast relaxation processes in real time with high temporal resolution.

Opto-Electronic Science (OES) is a peer-reviewed, open access, interdisciplinary and international journal published by The Institute of Optics and Electronics, Chinese Academy of Sciences as a sister journal of Opto-Electronic Advances (OEA, IF=9.682). OES is dedicated to providing a professional platform to promote academic exchange and accelerate innovation. OES publishes articles, reviews, and letters of the fundamental breakthroughs in basic science of optics and optoelectronics.

Submission of OES may be made using ScholarOne (https://mc03.manuscriptcentral.com/oes) 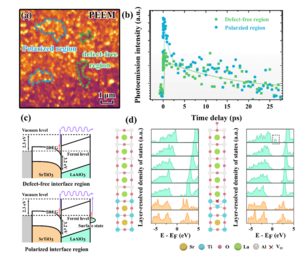