What factors influence the embodiment felt towards parts of our bodies controlled by others?  Using a new “joint avatar” whose left and right limbs are controlled by two people simultaneously, researchers have revealed that the visual information necessary to predict the partner’s intentions behind limb movements can significantly enhance the sense of embodiment towards partner-controlled limbs during virtual co-embodiment. This finding may contribute to enhancing the sense of embodiment towards autonomous prosthetic limbs.

Virtual reality can enable us to be co-embodied with others in a single avatar to collaboratively perform various tasks. A previously published study about a “shared avatar” that was moved by the average movements of two individuals has shown that the movements of the shared avatar were smoother and straighter than the movements of the individuals (Hagiwara et al., iScience 2020). Thus, such avatars can be expected to be better at fine movement tasks. However, when it comes to users with disabilities in certain limbs, getting them partners to fully control the corresponding limbs of their virtual avatars can be an option.

Here, Ph.D. candidate Harin Hapuarachchi and Professor Michiteru Kitazaki from Toyohashi University of Technology developed a “Joint Avatar” whose left and right limbs are fully controlled by two different persons, and investigated the factors affecting embodiment towards limbs controlled by a partner.

Researchers measured the senses of agency and ownership towards the two arms of the joint avatar and changes in skin conductance levels in response to visual stimuli threatening the two virtual arms. Dyad participants were asked to collaboratively reach one or two target objects appearing at random positions with the two arms of the joint avatar. The sense of agency, ownership, and skin conductance of participants were significantly higher towards the virtual arm under their control compared to the virtual arm controlled by their partner. Furthermore, the senses of agency and ownership towards the arm controlled by the partner were significantly higher when the participant dyads shared a common intention to reach a single target with both hands or when they were allowed to see their partner’s target while reaching different targets with the two virtual hands, compared to when the partner’s target was invisible (while having two different targets).

The lead author, Harin Hapuarachchi, said, “The Joint avatar concept can provide a research platform for virtually studying how different factors – such as various haptic, visual, and auditory feedbacks – affect embodiment towards autonomous prosthetic limbs in the future. Amputees wearing smart prosthetics may feel some discomfort when those prosthetic limbs move autonomously without their intention. However, our findings suggest that if the target of the prosthetic limb or the intention behind movements is conveyed to the user through visual cues, they may feel less discomfort related to lack of embodiment.”

Furthermore, Professor Michiteru Kitazaki added, “The senses of ownership and agency towards the non-controlled arm were still weak and the physiological responses were not significantly different among the target conditions. Thus, our findings are limited, and the research is ongoing.”

The concept of this joint avatar can be applied to combining the strengths of two or more people to increase overall efficiency in multi-tasking, and may also contribute to designing autonomous prosthetic limbs with a higher sense of embodiment in the future.

This study was published in Scientific Reports on July 26, 2022. 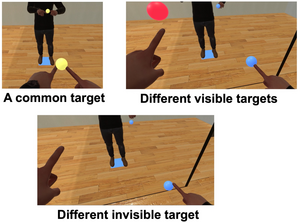 Short description of the study