The new attack method proposed by Professor Long Guilu and others uses Variational Quantum Algorithm (VQA). They studied the security of the symmetric cryptography S-DES (Simplified Data Encryption Standard) under the VQA attack. They constructed a Hamiltonian based on a pair of known plaintext and its corresponding ciphertext. The ground state of the Hamiltonian corresponds to the quantum state of the chosen ciphertext. By using variational methods, they found ground state of Hamiltonian, then the key can be obtained. Simply put, in VQA, a quantum circuit is constructed in which there are several transformations with parameters, and these parameters are varied to obtain the minimum value of Hamiltonian. They used six ansatzes and two different classical optimization methods to calculate a total of 12 different variational strategies, and the results are shown in Table 2 of the article. Of the two optimization methods, the gradient descent method is better than the simplex method. The key can be obtained by 30-56 searches on average, which is similar to the 32 required by Grover's attack.

Quantum technologies such as quantum secure direct communication and quantum key distribution can address this challenge. Quantum secure direct communication leaves the eavesdropper without any data related to the message, nothing to decipher, no matter how much computing power the decipherer has. Quantum key distribution makes it impossible for eavesdroppers to obtain any key information, and the use of these keys to encrypt the information with one-time pad has been proved to be undecipherable. 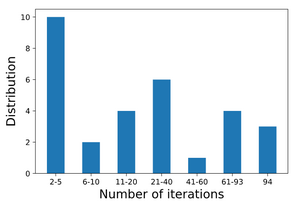 The distribution of the number of iterations