Orchestrating rhythms of the light

A team of scientists led by Oak Ridge National Laboratory developed a theory that thylakoids, membrane networks key to plant photosynthesis, also function as a defense mechanism to harsh growing conditions, which could aid the development of hardier plants.

Thylakoids contain grana, structures resembling stacked coins that expand and contract when water flows in and out, like the bellows of an accordion. The action mirrors the movement of guard cells, structures on plant leaves that act like accordion buttons, allowing carbon dioxide in and water vapor out.

These structures harmonize the flow of electrons with carbon uptake during photosynthesis. Scientists have questioned why such a complicated network exists in hardier plants. ORNL researchers theorize that it helps plants tolerate fluctuating conditions such as too little or too much water and sunlight.

Caption: The bellows-like action of the thylakoid membrane inside plant chloroplasts harmonizes the flow of electrons to power photosynthesis. A team of scientists led by ORNL theorize the thylakoid can help plants respond to stressful growing conditions such as drought. Credit: Nathan Armistead and Jacquelyn DeMink/ORNL, U.S. Dept. of Energy

The facts behind hydropower

Hydropower accounts for nearly 7% of all electricity generated in the United States and provides quick-start capabilities during blackouts and the ability to store power for high-demand periods.

HydroSource provides updated information on hydropower facilities and infrastructure, models and visualizations for future development, and analytical tools to better understand how and where hydropower can be implemented throughout the U.S.

“We created this digital platform to enable stakeholders, including hydropower developers and operators, non-governmental agencies and advocacy groups, and policy makers to make data-driven decisions,” said ORNL’s Debjani Singh. “We all want the same thing – to develop reliable, sustainable energy while protecting the environment.” — Mimi McHale

Caption: The Melton Hill Dam on the Clinch River in East Tennessee can generate up to 79 megawatts of energy for the Tennessee Valley Authority. Credit: Jason Richards/ORNL, U.S. Dept. of Energy

The design enables scientists using neutron scattering, a technique that measures atoms inside materials, to complete characterizations of samples without pauses for adjustments. The AI software determines the optimal angles to measure based on a sample’s shape, greatly reducing the amount of unnecessary data that could slow down experimental results.

Once developed, the technology can be used on any neutron scattering instrument, which will significantly increase the number of experiments and improve the quality of scientific data that only neutrons can provide. (video)

Caption: The AI-driven HyperCT platform has three primary points of articulation that can rotate a sample in almost any direction, eliminating the need for human intervention and significantly reducing lengthy experiment times. Credit: Genevieve Martin, ORNL/U.S. Dept. of Energy

Steady as it goes and flows

Heat exchangers are shells or pipes that use metal tubing to transfer heat from one place to another. In contrast, a microchannel exchanger uses a maze of smaller pathways, making it low weight and lower cost while providing superior performance. However, these small channels can cause refrigerant maldistribution, putting extra pressure on the compressor.

In a study, the team developed a prototype PEDMA insert consisting of 3D printed resin parts and small permanent magnets.

“The magnets work to actively change the geometry inside the exchanger once inserted into the equipment,” ORNL’s Joseph Rendall said. “Testing showed significant improvement of refrigerant flow. This represents a new method for controlling flow distribution in microchannel heat exchangers.”

Caption: Oak Ridge National Laboratory researchers developed a device called a piezoelectric-driven magnetic actuator, or PEDMA, that can be inserted into the header of a microchannel heat exchanger to keep refrigerants flowing evenly and the HVAC unit running efficiently. Credit: ORNL, U.S. Dept. of Energy

Researchers at Oak Ridge National Laboratory and Momentum Technologies have piloted an industrial-scale process for recycling valuable materials in the millions of tons of e-waste generated annually in the United States.

Rare earth elements, or REEs, are strategic resources in high demand but in limited supply for advanced clean energy and defense technologies. Domestic pathways for securing supply chains are needed.

Researchers previously demonstrated a method for recycling scrap permanent magnets in consumer electronics using membrane solvent extraction. Now the technology has met a critical step toward deployment. The system has been scaled up to achieve high-purity separations, as reported in Advanced Engineering Materials.

“The system is modular and scalable with a small footprint and minimal waste,” said ORNL’s Ramesh Bhave. 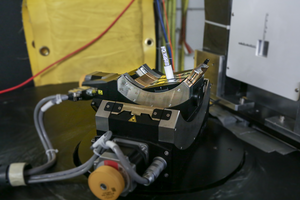 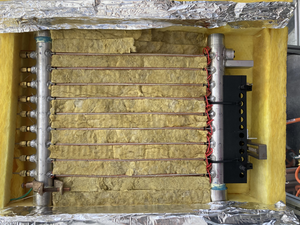 Steady as it goes and flows 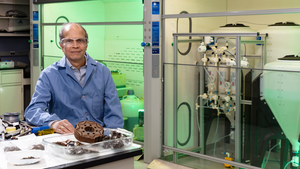 Orchestrating rhythms of the light