A gene that enhances plant protection against fungi, bacteria, and adverse environmental factors was identified by scientists from the Ural Federal University (UrFU) and the Pushchino Scientific Center of the Russian Academy of Sciences. Modifying plants with this gene will help protect crops from common diseases. Experiment results are published in the journal Plants.

Stilbene Synthase is the gene responsible for the synthesis of resveratrol in plants. This compound is highly biologically active, helping plants protect themselves from drought, frost, salinity and other negative environmental factors. Scientists extracted the Stilbene Synthase Gene from grape leaves and used it to create modified plants that are resistant to a number of common bacterial and fungal pathogens.

“We have demonstrated that adding Stilbene Synthase to the genome of plants increases their resistance not only to physical and chemical factors, but also to infections. In the future, our results can be used to protect plants from diseases,” said Alexander Ermoshin, Associate Professor at the Department of Experimental Biology and Biotechnologies, UrFU.

Stilbene Synthase-modified plants showed high resistance to pathogens dangerous to agroindustry, including Erwinia, Fusarium, Botrytis gray and other fungi and bacteria. These pathogens cause disease in a large number of crops, and infection with them can lead to the loss of a large part of the crop.

One of the tobacco species served as a model plant for the scientists of UrFU and the Branch of the Institute of Bioorganic Chemistry of the Russian Academy of Sciences. Special agrobacterium "loaded" with this gene was used to add Stilbene Synthase to the genome. According to the scientists, this is a completely natural process, repeating one of the mechanisms of natural plant mutation.

“An important part of the study was to analyze the effect of Stilbene Synthase on other characteristics of the modified plants. The tests showed that our transgenic tobacco does not differ from the usual tobacco, except for increased resistance to pathogens,” said Alexander Ermoshin.

It should be noted that specialists from Voronezh State University of Forestry and Technologies and the Federal Budget Institution of Science "State Research Center for Applied Microbiology and Biotechnology" also participated in the study. In the future, the research team intends to investigate the beneficial effects of plant modification with other genes. 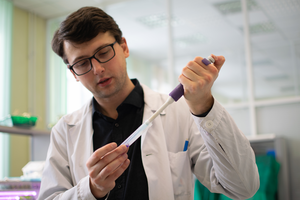