Areas with ground temperature below 0 °C for more than two years is called permafrost. Permafrost is widely distributed mainly in the tundra and taiga areas at high latitudes in the northern hemisphere. The existence of permafrost has only been confirmed in very limited locations with high altitudes and latitudes today in Japan, because of its location at the southern limit of the global permafrost distribution. Previous studies have evaluated the current state of permafrost and predicted the future in Europe and the Tibetan Plateau, but little research has been done in the East Asian region including Japan. In our previous research, we evaluated the current situation and predicted the future in the Daisetsu mountains (https://www.eurekalert.org/news-releases/923643). In this study, the similar analysis was performed throughout Japan. We used 1 km resolution climate projection in Japan to estimate areas in a temperature environment that maintains permafrost. By calculating the number of days when the temperature falls below and above 0 °C in a year and using an empirical formula obtained from the observation of the permafrost distribution, we estimated the permafrost area in Japan with a resolution of 1 km.

Figure 1 shows the results of our estimated map of the permafrost area in Japan. The observation points where permafrost has been confirmed locally are shown in red. Our estimation results are consistent with the observation as shown in Figure 1. As mentioned above, in Japan today, the existence of permanent has been confirmed only in very limited points at Daisetsu Mountains, Northern Alps, and Mt. Fuji. Our research has revealed that permafrost can be existed at other places, such as Hidaka Mountains, Mt. Shiretokodake, Mt. Sharidake, Southern Alps, Mt. Akan and Mt. Yotei.

Figure 2 shows the change in the area with surface air temperature conditions required to sustain permafrost in Japan. The difference in results due to the difference in climate models used for the estimation is shown in gray. Permafrost area is projected to decrease from around the year 2000. This is because the surface air temperature in Japan is rising due to global warming, as shown in our previous study on the Daisetsu Mountains.

Although permafrost has only been identified in very limited areas in Japan today, our research suggests that there may be unidentified permafrost in various regions. Permafrost itself, which exists in Japan, is extremely rare, so it may be a place of interest to people as a frigid place where permafrost exists. Also, as mentioned above, Japan's permafrost is located at the southern limit of the global permafrost distribution, so it is considered to be extremely susceptible to global warming. For this reason, Japan's permafrost is an important observation target as an indicator of the impacts of climate change, and the area shown in Figure 1 is an important candidate for future permafrost survey points. For example, Shiretoko is designated as a UNESCO World Heritage Site, but it is extremely vulnerable to global warming, so it is recommended by the World Heritage Committee to strengthen monitoring of the natural environment. Understanding the impact of climate change that is already occurring by monitoring Japan's permafrost is a very important task.

Progress in Earth and Planetary Science 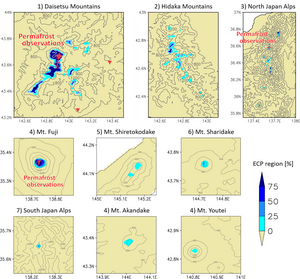 Fig.1 Distribution of regions with surface air temperatures that favor the maintenance of permafrost in Japan under the current climate conditions 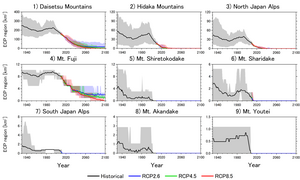 Fig.2 Time sequence of areas in mountainous regions of Japan with surface air temperatures that favor the maintenance of permafrost