Opera arias are typically rich in coloratura, for example fast, high notes that stretch over a wide frequency range. Coloratura aren't just beautiful to listen to: they are also designed to allow the best singers to show off their virtuosity. Now, researchers from Sam Ratulangi University in Indonesia and Cornell University in the US show that pairs of Gursky’s spectral tarsier sing duets that have evolved to similarly show off virtuosity – at least, for those individuals that manage to pull off their species' version of coloratura: rapidly repeated broadband notes emitted in coordination to form a duet between adult males and females.

The researchers show that not all tarsiers can sing these duets equally well. Some Gursky’s spectral tarsiers achieve a few notes that stretch over the widest bandwidth, others with many rapid repetitions of notes, but only a minority manage both simultaneously. These results suggest that the complexity of duets might signal information to extra-pair conspecifics about the physical fitness of the dueting pair in this species. In other words, they may represent the tarsier equivalent of a peacock's tail, but for both females and males.

"Here we show that Gursky’s spectral tarsier duets exhibit acoustic trade-offs in note rate and note bandwidth – that is, the range of frequencies within a note," said first author Isabel Comella, a researcher at the K Lisa Yang Center for Conservation Bioacoustics and a recent Cornell University graduate.

"To produce high-frequency notes with wide bandwidths, Gursky’s spectral tarsiers must make rapid and comprehensive vocal modifications, which may be physically demanding. So on average, we find that duets with a wide bandwidth tend to have notes that are repeatedly more slowly, and vice versa," said Comella.

Tarsiers are small (weighing between 100 and 200 g) nocturnal primates in the Philippines, Indonesia, and Malaysia, part of the clade of the prosimians, the sister group of monkeys, apes, and humans. Tarsiers are rumored to have been the inspiration for fan favorite Yoda from the Star Wars franchise. Gursky’s spectral tarsier (Tarsius spectrumgurskyae) was only recognized as a separate species in 2017, based on differences with close relatives in genetics, vocalizations, and fur color. Classified as Vulnerable on the IUCN Red List of Threatened Species®, T. spectrumgurskyae only occurs on the Indonesian island of Sulawesi.

Gursky’s spectral tarsiers are socially monogamous: pairs occupy territories of between 1.6 and 4.1 hectares, which they 'defend' by singing duets, to advertize to conspecifics that they already have a mate and that their territory is taken. In this way, costly and dangerous fights are kept to a minimum. Sometimes juveniles join in their parents' song, so that the singing becomes a chorus.

Between July and August of 2018 in Tangkoko National Park in North Sulawesi, Comella and her co-authors recorded 50 duets consisting of a total of 6681 notes sung by 14 T. spectrumgurskyae female-male pairs. They used machine learning to distinguish and classify notes and phrases of notes with each individual's song repertoire, based on the minimum and maximum frequency, the bandwidth, the duration, and the rate of notes per second.

Each duet lasted between 13 and 204 seconds, and females and males were equally likely to start duets. The distribution of note types was continuous, meaning that the vocal range of tarsiers isn't composed of discrete notes like the human do, re, mi, but rather of a graded range of frequencies combined into a duet. The mean frequency of female and male duets was similar, but female duets tended to have a narrower bandwidth around this mean than male duets.

Importantly, there was a negative relationship between note bandwidth and rate of duets for both sexes, suggesting the existence of a trade-off between these two traits, but this relationship was more steeply negative  ̶  that is, stronger  ̶  for females. These results are consistent with a trade-off between note rate and bandwidth of duets, as also seen in other species.

The authors hypothesize that these physiological constraints make it hard to sing broadband notes fast, so that only physically fit individuals can easily do so. But whether very old, very young, sick, or underfed T. spectrumgurskyae are particularly bad at producing these duets still needs to be studied.

"Evidence for analogous trade-offs between rate and bandwidth of vocalizations has previously been found in several species of birds, bats, mice, and other primates. That they occur in so many diverse species, including T. spectrumgurskyae, suggests that they may be due to morphological or neurological constraints in vocal production that are near-universal across animals, something rare in bioacoustics," said last author Dr Dena J Clink, a researcher at the K Lisa Yang Center.

Understudied group for which many questions need answering

Why singing broadband notes in quick succession should be especially taxing for females, like the results suggest, is not yet known.

“There is still so much to be learned about the function of tarsier duets: the information they contain about the calling animals, and what information other tarsiers pick up on. The possibility that duets contain information about the fitness of a calling individual – the vocal equivalent of a peacock’s tail – is an exciting avenue for future research. In our study we showed that this trade-off exists, and now it is up to others to help us understand what it means,” said Clink.

"Tarsiers are understudied compared to their more 'popular' primate relatives, so they represent a vast area of research yet to be explored. For example: Do their duets accurately reflect their fitness? What exactly are the different functions of their duets? How can we apply research like this to help wild populations recover and thrive? We hope to answer some of these questions in our future studies," concluded Comella. 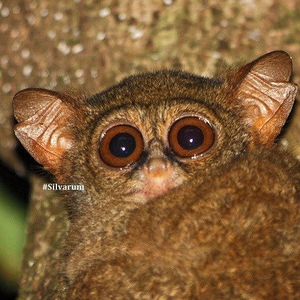 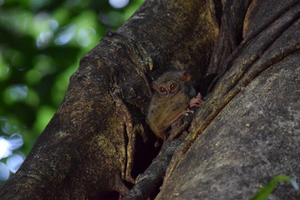