Platinum has long been the preferred catalyst for electrochemical hydride transfer, a versatile chemical process for producing valuable chemicals or carbon-free fuels. If this electrochemical process was powered with renewable electricity, it could enable a more sustainable society. Platinum, however, is a rare and expensive precious metal, placing significant limitations on the uptake of this technology.

A far more abundant and less costly metal, molybdenum, could potentially take platinum’s place in the process, Magnus Rueping and his team have shown.

Several molybdenum-based catalysts, including molybdenum sulfide, have previously shown promise for hydride transfer electrocatalysis, but the reason for their high activity was unclear, and molybdenum’s role, in particular, remained a mystery. “We wanted to determine how this catalyst functioned,” says Jeremy Bau, a research scientist in Rueping’s lab.

The team applied a technique called electron paramagnetic resonance spectroscopy (EPR) in a bid to study the molybdenum sulfide electrocatalyst in action in real time. “Unexpectedly, we were able to capture the entire process as it was happening,” Bau says. “We were able to trap the catalyst’s active state: Mo3+ ions directly bound to hydrogen.”

The finding that molybdenum ions directly participate in hydride transfer could lead to improved catalysts. “If we can demonstrate a cohesive theory for how molybdenum is responsible for hydride transfer activity, we can focus on improving molybdenum so that it can be competitive with platinum and also on developing new molybdenum catalysts as cheaper replacements for platinum,” Bau says.

One application of the catalyst could be to electrochemically split water molecules to produce hydrogen gas as a way to turn renewable electricity into a storable, transportable fuel. However, the team also showed the catalyst had great potential for empowering enzyme biocatalysts for green chemicals production.

In cells, enzymes often work with nature’s energy-carrier molecule NADH to catalyze reactions. However, NADH is prohibitively expensive for industrial biocatalysis. Electrochemically generated molybdenum hydride proved to be highly effective at regenerating NADH in situ in the biochemical reaction flask.

“We were surprised by the efficiency of the process,” Rueping says. “By-products are avoided and pure NADH is produced. Our discovery raises the possibility that the long-held goal of making chemicals through enzymes can be enabled by electrochemistry.” 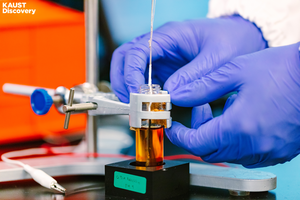 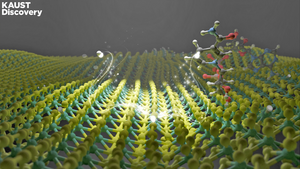