SCIENTISTS at the University of Huddersfield have secured significant funding to develop novel and sustainable molecular materials that harness light to drive useful chemical reactions.

The project will be led by inorganic chemists Professor Paul Elliott and Dr Paul Scattergood, within the University’s Centre for Functional Materials in the School of Applied Sciences.  Funded by the Leverhulme Trust, and with initial seed corn funding for preliminary work from the University’s International Collaborative Fund for strategic partnerships, from  the project is part of an international collaboration with researchers in Sweden and France.

The research focusses on photoactive transition metal complexes, molecules which are formed from a central atom of a metallic element to which is attached organic ‘ligand’ molecules, and which respond to light shone upon them.

The ‘long-lived’ excited states formed upon absorption of light by these molecules, can result in luminescence, with potential application in light-emitting and display technologies. They may also result in photochemical reactions where the energy absorbed by the molecule, or an electron from the molecule, can be transferred to other molecules.

These processes can be used to drive useful chemical reactions, for example, selective and targeted synthesis of pharmaceutical components or form the basis of targeted and selective medical interventions, an area known as ‘photodynamic therapy’.

One of the drawbacks of the materials used for these applications is that the metal atom in these complexes often belongs to rather rare and expensive elements such as ruthenium, iridium, platinum, etc…

In what is currently one of the hottest areas of modern chemistry, this new project focusses on the development of new photosensitiser complexes that incorporate a central atom of metallic elements that are far more abundant in the Earth’s crust, making these materials cheaper and far more sustainable.

“It’s far from a simple challenge,” said Professor Elliott who is also the University’s Associate Dean (International) within the Department of Chemical Sciences. “One can take a successful complex incorporating a ruthenium atom, but simply substituting for iron, the element immediately above it in the periodic table, and you then make a complex which, on the surface looks very similar as one might expect, but functionally is very different with extremely short, excited state lifetimes.

“They simply don’t have chance to do anything useful with the light energy,” he said.

This challenge has meant researchers have expended significant effort with the molecular engineering of iron-based complexes, for example, in attempts to force iron to behave similarly to ruthenium.

Whilst there has been some success, recent results from a number of groups across Europe has highlighted the exploration of the intrinsic properties of lighter and more abundant elements like iron and different modes of operation that may offer highly promising avenues for the development of novel photofunctional materials.

“Rare and heavy elements like ruthenium and iridium are really good at what they do,” Professor Elliott explained.

“However, if we are to explore and exploit these very different systems based on lighter and more abundant metals, we must rip up the rule book and learn new molecular engineering strategies from scratch.

“It’s opening up whole new paradigms in photophysics and photochemistry. It is a really exciting time,” he added. 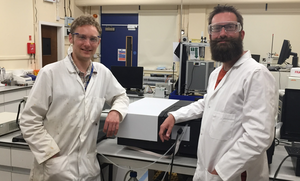