Physicists are (temporarily) augmenting reality to crack the code of quantum systems.

Predicting the properties of a molecule or material requires calculating the collective behavior of its electrons. Such predictions could one day help researchers develop new pharmaceuticals or design materials with sought-after properties such as superconductivity. The problem is that electrons can become ‘quantum mechanically’ entangled with one another, meaning they can no longer be treated individually. The entangled web of connections becomes absurdly tricky for even the most powerful computers to unravel directly for any system with more than a handful of particles.

Now, quantum physicists at the Flatiron Institute’s Center for Computational Quantum Physics (CCQ) in New York City and the École Polytechnique Fédérale de Lausanne (EPFL) in Switzerland have sidestepped the problem. They created a way to simulate entanglement by adding to their computations extra “ghost” electrons that interact with the system’s actual electrons.

In the new approach, the behavior of the added electrons is controlled by an artificial intelligence technique called a neural network. The network makes tweaks until it finds an accurate solution that can be projected back into the real world, thereby re-creating the effects of entanglement without the accompanying computational hurdles.

The physicists present their method August 3 in the Proceedings of the National Academy of Sciences.

“You can treat the electrons as if they don’t talk to each other, as if they’re noninteracting,” says study lead author Javier Robledo Moreno, a graduate student at the CCQ and New York University. “The extra particles we’re adding are mediating the interactions between the actual ones that live in the actual physical system we’re trying to describe.”

In the new paper, the physicists demonstrate that their approach matches or outclasses competing methods in simple quantum systems.

“We applied this to simple things as a test bed, but now we are taking this to the next step and trying this on molecules and other, more realistic problems,” says study co-author and CCQ director Antoine Georges. “This is a big deal because if you have a good way of getting the wave functions of complex molecules, you can do all sorts of things, like designing drugs and materials with specific properties.”

The long-term goal, Georges says, is to enable researchers to computationally predict the properties of a material or molecule without having to synthesize and test it in a lab. They might, for instance, be able to test a slew of different molecules for a desired pharmaceutical property with just a few clicks of a mouse. “Simulating big molecules is a big deal,” Georges says.

The new work is an evolution of a 2017 paper in Science by Carleo and Matthias Troyer, who is currently a technical fellow at Microsoft. That paper also combined neural networks with fictitious particles, but the added particles weren’t full-blown electrons. Instead, they just had one property known as spin.

“When I was [at the CCQ] in New York, I was obsessed with the idea of finding a version of neural network that would describe the way electrons behave, and I really wanted to find a generalization of the approach we introduced back in 2017,” Carleo says. “With this new work, we have eventually found an elegant way of having hidden particles that are not spins but electrons.” 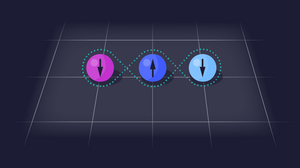