Sneezing out mucus may be one of the oldest ways for organisms to get rid of unwanted waste. A group of researchers found that sponges, one of the oldest multicellular organisms in existence, “sneeze” to unclog their internal filter systems that they use to capture nutrients from the water. Additionally, authors find that other animals who live with the sponges use their mucus as food. Their findings are publishing August 10 in the journal Current Biology.

“Our data suggest that sneezing is an adaptation that sponges evolved to keep themselves clean,” says Jasper de Goeij, a marine biologist at the University of Amsterdam and the senior author of the paper.

While the field has known about this behavior for years, the authors of this paper show that these sneezes get rid of materials the sponges cannot use. “Let’s be clear: sponges don’t sneeze like humans do. A sponge sneeze takes about half an hour to complete. But both sponge and human sneezes exist as a waste disposal mechanism,” says de Goeij.

Sponges gather food for themselves by filtering out organic matter from the water. They draw in and eject water from different openings, and sometimes the sponges will suck in particles that are too big. “These are sponges; they can’t just walk to somewhere else when the water around them gets too dirty for them to handle,” says de Goeij. This is when the “sneezing” mechanism comes in handy.

In videos that the authors included in the paper, you can see the water inlets slowly release mucus, and the mucus will accumulate at the surface of the sponge. Occasionally, sponge tissue will contract and push the waste-containing mucus into the surrounding water.

While the mucus may be waste to sponges, the fishes who live around them think otherwise. “We also observed fish and other animals feeding off of the sponge mucus as food,” says Niklas Kornder (@KornderA), the first author of the study and a doctoral researcher in de Goeij’s research group. “Some organic matter exists in the water surrounding the coral reef, but most of it is not concentrated enough for other animals to eat. Sponges transform this material into eatable mucus,” says Kornder.

The paper recorded “sneezing” behavior in two species of sponges, the Caribbean tube sponge Aplysina archeri and another Indo-Pacific species of the genus Chelonaplysilla. “We actually think that most, if not all, sponges sneeze. I’ve seen mucus accumulate on different sponges while diving and in pictures taken by other scientists for other purposes,” says Kornder.

“Our findings highlight opportunities to better understand material cycling in some of the most ancient Metazoans,” say the authors in the paper.

There are still many aspects about sponge “sneezes” that remain open questions. “In the videos, you can see that the mucus moves along defined paths on the surface of the sponge before accumulating. I have some hypotheses, but more analysis is needed to find out what is happening,” says Kornder.

“There are a lot of scientists that think that sponges are very simple organisms, but more often than not we are amazed by the flexibility that they show to adapt to their environment,” says de Goeij.

This work was supported by the European Research Council under the European Union’s Horizon 2020 research and innovation program.

Sponges “sneeze” to dispose of waste 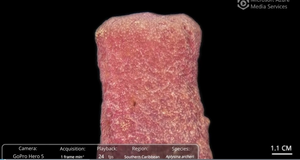