Traditional computing is increasingly being replaced by artificial intelligence (AI) techniques to achieve pattern recognition capabilities across many domains, including healthcare, manufacturing and personal computing. The increasing complexity of “neural networks” required for AI capabilities causes an exponential rise in energy consumption. In the face of ever-shrinking energy budgets, there is a growing need for data processing at the collection point, known as the edge, especially for real-time applications.

Enter small but mighty skyrmions – tiny, winding arrangements of electron spins that form in certain magnetic thin films. These energy-efficient information carriers are stable at room temperature, and can be moved by electrical currents to potentially mimic how signals are sent and received by biological nerve cells in the human brain.

“Magnetic skyrmions are uniquely positioned because they are of scientific interest, stable in industry-compatible materials and environments, and have applications in leading-edge computation problems”, said Dr Xiaoye Chen from the Spin Technology for Electronic Devices (SpEED) team at A*STAR’s Institute of Materials Research and Engineering (IMRE).

GETTING TO KNOW SKYRMIONS: WHAT MAKES THEM THE WAY THEY ARE?

In order to design skyrmions with desired characteristics suited to device-specific needs, a key requirement is to understand what material properties affect their structure and stability.

Researchers from A*STAR’s IMRE and Institute of High Performance Computing (IHPC), the National University of Singapore (NUS) and Lawrence Berkeley National Laboratory (LBNL)’s CXRO have collaborated to explore factors affecting the key physical characteristics of skyrmions in thin magnetic films, in a study published in Advanced Science in January 2022.

The team leveraged a magnetic thin film platform comprising a sequential stacking of atomically thin metallic layers, which was previously developed at A*STAR. This multilayer platform uniquely allows the magnetic interactions governing skyrmion properties to be directly controlled by varying the thickness of the constituent layers.

The team investigated the spin structures formed in these thin films using a range of specialised magnetic imaging methods, including electron microscopy and soft X-ray microscopy, as well as simulation techniques such as ab-initio and micromagnetic calculations.

Interestingly, the team found that several key properties of magnetic skyrmions could be tuned by varying a single material parameter, 𝜅, which loosely represents the “ease” of creating spin structures within the material.

First, increasing the 𝜅-value from zero causes a sharp change in the winding arrangement of spins forming the skyrmion, known as its “helicity”, which is then fixed for larger values of 𝜅.

Next, increasing 𝜅 changes skyrmions’ elasticity, or “compressibility”. For smaller 𝜅-values, skyrmions can readily shrink and expand, much like soap bubbles. But for larger 𝜅-values, they are highly compact, like billiard balls.

Overall, the work provides a material-based framework for controlling skyrmion properties for future use within devices.

TURNING THE HEAT UP: FROM STRIPE TO SKYRMIONS

In a follow-up study published in Physical Review Applied in April 2022, the team used a combination of magnetometry, imaging and simulation techniques to explore the temperature dependence of the stripe-to-skyrmion transition.

Their work established that with increasing temperature, each stripe splits or fissions into larger number of skyrmions, leading to an increase in the density of skyrmions. Such knowledge of the impact of temperature on skyrmions offers possibilities for future technological development, where controlled temperature cycles can be used for efficient skyrmion generation in future unconventional computing applications.

With both studies providing a comprehensive framework for controlling skyrmion properties, creating customising skyrmions with characteristics tailored for different applications is closer to reality. For example, electrical devices may utilise either skyrmion size or skyrmion number to perform logic operations, which could utilise either low-𝜅 or high-𝜅 materials respectively. In due course, this may enable the development of skyrmionic devices for next-generation computing. 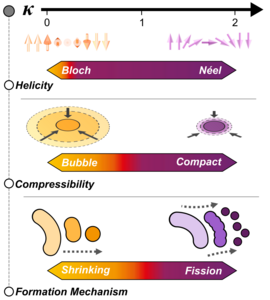