Computer-based animators who are tasked with bringing to life imaginary worlds and characters are aided by simulators that can model the many possible ways an object or fluid might move through a physical space. Known as “solvers,” these simulators provide a significant head start on the work of animation. But there’s a catch. As computers have gotten faster, these solvers often create too many options for the animator to effectively sort through looking for just the right one.

“A simulator can return thousands of options. It’s so time consuming to sort through them that these helpful solvers can’t be used to their full potential,” said Purvi Goel, a doctoral candidate in computer science at Stanford, who with her mentor, professor Doug James, has created a new approach to refine the search and narrow results to the most promising options.

They call it “Unified Many-Worlds Browsing,” and they will debut their approach at the upcoming SIGGRAPH 2022 conference in Vancouver, British Columbia, the premier annual gathering for computer graphics and interactive techniques. The approach could both speed the search process for animators and, by limiting the options the simulators must cycle through, reduce compute time and expense. Ultimately, the researchers hope, it will allow artists and scientists to interface with solvers with unparalleled ease and efficiency.

“We’ve got this interesting conflict in the field that every year computers get faster, more parallel, and they can do more, but it’s the humans who are getting maxed out,” said James, who is a professor of computer science.

Solvers are controlled by input parameters – the physical dimensions of the object in the animation. In one example, the researchers used Unified Many-Worlds Browsing to animate an imaginary bowling alley. The parameters include the starting velocity and position of the ball.

A solver simply steps through the parameters incrementally, one by one, and simulates the many potential outcomes over the course of time. The key point is that there can be many input parameters, and the longer and more complex an animation is, the more parameters and compute time are needed to create simulations, and the more options are generated.

“If you are an animator and you have some idea in mind, you have to tune those parameters manually, then sort through all the outcomes one by one,” Goel explained.

Unified Many-Worlds Browsing allows animators to create “queries” to narrow down the options to make the process of identifying very specific outcome options easier. Queries can, for instance, confine outcomes to only those the animator is most interested in – including those that are either “in” a desired range of possibilities or, conversely, excluding those that are “not in” that range. Sample animations are available to view on the researchers’ website.

Asked to animate a stuffed armadillo falling down a spiral staircase, for instance, the animator might create a query in the Unified Browser that says, “Show me only options where the armadillo falls all the way to and comes to rest on the lowest stair.” Charged with animating cubes of Jell-O bounding into a bowl, the animator could limit options only to those where all the cubes stay in the bowl, or perhaps where one, but only one, falls out. A small blue ball launched at an imaginary sandcastle might specify “give me samples where the front-left turret is smashed” or “the top turret only.”

If the queries are well defined, Unified Many-Worlds Browsing could potentially reduce thousands of possible options to a handful that are interesting to the user, Goel says. Plus, the fact that this browsing framework can work with everything from fluids to smoke to fracturing solids – why it’s described as “unified” – sets it apart from previous options, which were limited in scope to a single physics-based phenomenon.

James says Unified Many-Worlds Browsing can pay surprising dividends in creativity. The browser, he says, can increase the likelihood of finding that “needle in the haystack” option that the animator might never have found with the solver alone.

“We found it can help find unlikely outcomes that will surprise – or even delight – viewers by their novelty,” said James. “‘Oh, wow, the ball went right between those two turrets and hit this other one just perfectly.’”

The browser has clear implications in the fictional animation space, the researchers say, but could also be adopted to benefit engineers, physicists, biologists, and other scientists who increasingly rely on simulations in their work.

“Unified Many-Worlds Browsing certainly makes the animator’s work faster and easier,” said Goel, “but we think it makes it more fun, too.”

James is also a member of Stanford Bio-X, the Wu Tsai Human Performance Alliance, and the Institute for Computational and Mathematical Engineering (ICME). This material is based upon work supported by the Department of Energy’s National Nuclear Security Administration. 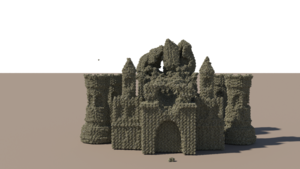