Fly-swatting season is here. No sooner will you place your fresh strawberries on the kitchen counter than will the first fruit fly arrive. It won’t take long for a platoon of Drosophila buddies to be hovering about the spoils.

If you opt to swat, swipe, slap, backhand or otherwise pursue your insecticidal inclinations, do not squander a learning moment. All you need to do is embrace that timeless maxim: know your enemy. A staple of the lab, the fruit fly has proven to be an unending source of biological inspiration and knowledge about how the brain and body develop and function.

Lesson One: Fruit Flies Have Been Around Longer Than We Have — A Lot Longer!

Most likely, you will fail miserably in your zeal to off your in-house fruit flies. It’s not that you are inept at lining up your lethal blows. It’s just that evolution has been honing the flies’ tiny brains, wings, sensory systems, musculatures and internal organs in the art of survival for some 40 million years. That’s 38 million more years than it has taken for us Homo sapiens to evolve from our Australopithecus ancestors. Fruit flies have been in evolution school much longer than humanity.

Lesson Two: Fruit Flies Have a Cult Following in Science.

Early in the 20th century, one of the first researchers to embrace this unwitting gift to science was Columbia University’s own giant in the history of genetics, Thomas Hunt Morgan. In 1910, in Schermerhorn Hall on Amsterdam Ave., Morgan noticed he could easily spot mutations, such as big white eyes instead of the flies’ usual big red ones. He and his lab mates learned how to link these physical mutations to specific genetic stretches located along the insects’ chromosomes.

Since then, these diminutive arthropods have remained beloved and revealing research partners. For much of what we know about genetics, inheritance, biological development, sensory science, many diseases and myriad other facets of biology, we have fruit flies to thank. A recent survey of the fruit-fly research community indicated that an estimate of more than 6,000 “fly workers worldwide seems conservative.”

When faced with a threat, a fruit fly can react almost instantaneously. To make basic evasive movements, the insect, even in its larval stages, has to keep precise track of where its body is in space. This body-place sense, common to all animals, is termed proprioception. It allows humans, for example, to know where their limbs are without looking directly at them and to make fine adjustments during any movement, such as reaching for a strawberry.

Wesley Grueber, PhD, and his colleagues at Columbia’s Zuckerman Institute discovered that a collection of sensory cells in the fly allow it to keep precise track of where different body regions are located during movement.

Dr. Grueber points out that similar cells and circuits probably kick in when flies make those aeronautic escape sequences that have you cursing in the kitchen. That is, unless your deftly executed backhands squash the fleeing fruit flies, so that their previous and gorgeous marriage of form and function morphs into entropic functionless stains.

If you could pick through the aftermath of a swatted fruit fly’s 580,000 or so cells, you would find at least some of the 800 light-harvesting facets, or ommatidia, that comprise each of a fly’s eyes. You might also find remains of the 200,000 neurons that make up the fly’s nervous system and thereby the circuitry it had used to see the world.

You would also be wandering into the territory of Rudy Behnia, PhD, a principal investigator at the Zuckerman Institute. Among other things, Dr. Behnia has been teasing out  the cellular circuitry and computations that underlie fruit flies’ color vision. “Spectral information in the world is very rich and flies could use it for object recognition,” as well as for determining the time of day and navigating with cues about the sun’s location from the sky’s color, Dr. Behnia says.

As is evident from your terrible batting average when it comes to fly-squishing, your insect nemeses know your murderous hand is coming. This intel derives from signal-delay circuitry built into the fruit fly’s visual system. If the initial sensory signals change between ommatidia, as happens when your hand is sweeping through a fly’s field of view, the resulting signal patterns deeper in the fly’s brain carry information about the direction your hand is moving.

Now add in the fly’s phototaxis, which plays into its knack for detecting and moving toward ultraviolet light, and you have the neurobiological foundation for an escape plan. “Since most objects in nature reflect rather than absorb ultraviolet radiation, the main source of natural UV is the open sky,” Dr. Behnia explains. That means that if you are a fruit fly, and you detect ill will coming your way, you just need to follow that UV to the open sky.

Lesson Five: Fruit Flies Do Mind-bending Math, All in Their Heads.

To plot their course through the world, and escape trajectories in times of peril, fruit flies use external reference points, such as the position of the sun, along with serious mental mathematics.

“The flies are doing trigonometry,” says Larry Abbott, PhD, co-director of the Center for Theoretical Neuroscience at the Zuckerman Institute. “It’s incredible.”

A fly’s mental computations start by representing vectors, mathematical arrows with angles and lengths that themselves represent the direction and speed of motion. Dr. Abbott and his colleagues discovered that the flies use wave-like patterns of brain activity to encode these vectors. The amplitudes and phases of those neural wave patterns match the lengths and angles of the corresponding vectors in actual space.

“Flies perform the types of vector calculations often assigned in introductory physics classes, but they do this in ways that are not typically taught in such courses,” says Dr. Abbott, adding that he is looking forward to the arrival, later this summer, to a new colleague at the Zuckerman Institute, Dr. Gwyneth Card. She will investigate the neural circuitry flies use to decide exactly what escape response to enact, say, as a threatening human hand violates their personal space.

A fly contains half a million cells, distributed among more than 200 cell types and organized into body parts ranging from the antennae on the front of its head to the hairs on its posterior. This sophisticated body plan emerges from a fertilized egg thanks to a mere eight genes in the Hox family: the master conductors of development.

Over many years of investigations, Richard Mann, PhD, another Zuckerman neuroscientist who studies fruit flies, has been teasing out how Hox genes, transcription factors, and many other genes and proteins coordinate their fly-building feats according to a brilliant logic of biological development. What scientists learn about this logic in model organisms like fruit flies often points to analogous developmental logic in people, says Dr. Mann. He stresses that the genetic common ground for humans and fruit flies extends beyond development genes. Says Mann: “So many human genes are also found in flies and a majority of human disease genes are also found in flies.”

Extracting yet more biological insight from fruit fly genes is Zuckerman Institute principal investigator Minoree Kohwi, PhD. She has been identifying the specific places and times in which development genes become active in sequential generations of cells of a growing fruit fly.

“Think of each gene as a single musical note: by itself, a note is an isolated sound, but play each note at the right time for just the right duration, and you get a beautiful symphony,” Dr. Kohwi said.

One of the big questions she aims to answer is this: “How are the thousands of different cell types produced in such an organized manner to allow proper brain function.”

Dr. Kohwi’s lab is uncovering the origins of a fly brain’s many different cell types and thereby helping to reveal the origins of a similar diversity of cells in her own brain. Her research excavates deep into the molecular foundations of life by revealing how and when development genes migrate to different locations within a cell’s nucleus. These migrations regulate when specific development genes are active and when they are repressed. And those on-off sequences, Dr. Kohwi says, “ultimately determine when each brain cell type can be made during development.”

Few Drosophila researchers would think twice about defending the fresh fruit on their tables with lethal force. But because of what they know about the marvels of fruit flies, you might see a flash of fly-admiration on their faces in the moment you hear thwap. 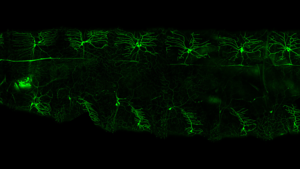 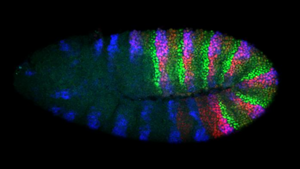 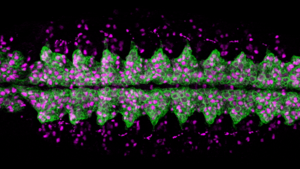