“The natural microbial community in deep waters is different from that at the ocean surface – almost two different worlds in a liquid space. Also, the amount of microbes per litre of ocean water in the deep sea is orders of magnitude lower than that at the surface,” says Annika Vaksmaa. “A thick rain of “alien” microbes drizzling from above with plastic shuttles could thus disturb the deep sea community.”

Matthias and Anika sampled plastic in the North Pacific subtropical gyre (also referred to as the Great Pacific Garbage Patch due to the high loads of plastic floating in these offshore waters). They did this by trawling the surface and deeper water layers with a fine meshed net. They analysing the collected particles by extracting DNA from the biofilms which covers the tiny plastic particles. After sequencing the DNA they could identify which microbial communities live on each plastic particle.

“Indeed, we found that plastic functions as an elevator in the water column. But the passengers (the microbes), enter and depart the elevator rather quickly,” says Vaksmaa. “DNA sequencing showed that the microbial communities on floating plastic particles are different from those in deeper water layers.” The researchers concluded that, while sinking, the microbes apparently detach from the plastic and other microbes, from the surrounding water, attach to the free spaces on the plastic. Vaksmaa: “I was surprised how clear the results were that the reach of the ‘vertical plastic shuttle’ already stops at a few meters below the surface.”

This study does not offer a solution for the global plastic pollution and the changes it has on the  biodiversity in the ocean. This study has been a collaborative project. Vaksmaa: "I am very glad to work with Matthias from The Ocean Cleanup, as such large expeditions to remote locations need facilities and great collaborators. Only together such expeditions can be carried out. I know Matthias since we did our PhDs at different universities. It is important to realize that in science-it is not one woman’s/man’s business, but a team effort.”

This study is part of a larger ERC funded project led by Helge Niemann at NIOZ that aims to unravel which types of microbes life on plastic and in how far ocean plastic serves as a  food source for microbes. ‘We investigate the fate of plastic in the sea and the ocean’s self-cleaning power. I.e. we want to know if and how fast marine microbes can eventually break down plastic debris" says Niemann.

Vaksmaa: “We aim to answer remaining open questions during similar oceanic expeditions, next time in the North Atlantic. Currently we can't rule out if certain single organisms do remain on the shuttle and enter deep ocean as quasi aliens. There they invade the native communities living in deeper water layers. We will attempt to check this in future expeditions.”

Some of the researchers are employed by The Ocean Cleanup company.

Good news! Microbes don’t descend down with plastic particles into the deep sea 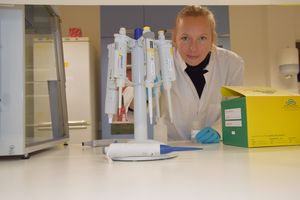 Annika Vaksmaa in the lab at NIOZ. 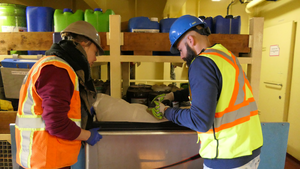 Annika Vaksmaa and Matthias Egger at the Pacific Ocean expedition. 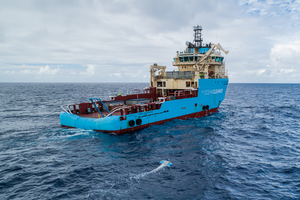 Fishing for plastic on the Pacific Ocean. 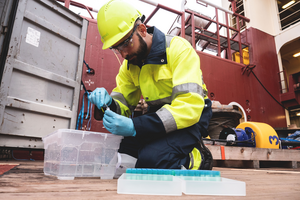 Matthias Egger collecting samples on board the Ocean Cleanup vessel.