Gender-diverse youth are at an increased risk of suicide and depression, according to the Centers for Disease Control and Prevention. But the prevalence of gender diversity is largely unknown—especially in rural areas, where studies of the topic are rare.

To fill that knowledge gap, researchers at West Virginia University— along with their colleagues at the University of Washington and Boise State University — surveyed junior high and high school students in rural Appalachia about their gender identity. They asked about the students’ internal sense of being male, being female or having another identity, like nonbinary. They found that more than 7% of young people surveyed shared a gender identity that did not fully align with the sex they were assigned at birth.

These findings were published in JAMA Pediatrics.

Being gender diverse, including being transgender, nonbinary or having another gender identity that doesn’t match the sex assigned at birth, is not a medical concern and is considered a normal part of human experience, according to the American Academy of Pediatrics.

Even though gender diversity isn’t an illness, some young people who are gender diverse experience distress when their gender doesn’t align with their physical characteristics or treatment in society. This distress, called “gender dysphoria,” can be associated with higher rates of depression or even thoughts of self-harm, prior research suggests.

“We have a lot of studies that suggest gender-diverse youth are two to four times as likely to experience depression and thoughts of self-harm as their cisgender peers, or young people whose sex assigned at birth and gender identity fully align,” said WVU School of Medicine researcher Dr. Kacie Kidd, who co-authored the study. “This is an area where we need to do more research. We need to better understand how to support these young people, especially now that we are increasingly recognizing that they are here and would likely benefit from the support.”

Other study authors include Alfgeir Kristjansson, an associate professor with the WVU School of Public Health; Brandon Benton, a nurse with WVU Medicine; Gina Sequeira, of the University of Washington; and Michael Mann and Megan Smith, of Boise State University.

A 2017 study suggested that West Virginia had the highest per capita rate of transgender youth in the country at just over 1%.

“Prior studies have used less inclusive questions when asking young people about their identity,” said Kidd, an assistant professor of pediatrics and internal medicine. “We suspected that this underestimated the prevalence of gender-diverse youth.”

She and her colleagues had previously asked these more inclusive questions to young people in Pittsburgh, a city in Appalachia. Nearly 10% of youth in that sample reported having a gender-diverse identity.

“Despite the high prevalence of gender-diverse identities found in our Pittsburgh study, information about rural areas was still unknown,” Kidd said. “We suspect that many of the young people in rural Appalachia who shared their gender-diverse identities with us in this study may benefit from additional support, especially if they do not feel seen and supported at home and in their community.”

This new study is one of many to recognize that researchers interested in gender diversity face a dearth of data when it comes to rural areas.

It’s also one of many studies to recognize that gender-diverse individuals can face a scarcity of health care options, affirming social networks and other forms of support in those same rural areas.

For example, in a recent study led by Megan Gandy, BSW program director and assistant professor at the WVU School of Social Work, up to 61% of participants said they had to travel out of West Virginia to access gender-related care.

And another recent study conducted by Zachary Ramsey, a doctoral candidate in the WVU School of Public Health, found that rural areas could present unique barriers to sexual and gender minorities.

Those barriers included discrimination and heteronormativity — or, the belief that a heterosexual and cisgender identity is the only “normal” one. They also included a lack of training for health care providers in handling LGBTQ concerns.

“Adolescent mental health is at a crisis point, according to the Centers for Disease Control,” Kidd said. “We have an access concern because so many young people need mental health services nationwide and we just don’t have enough mental health professionals to meet that need. It’s a growing problem and certainly gender-diverse youth are at an even greater risk.”

In CDC data, the number of adolescents reporting poor mental health has increased, especially during the COVID-19 pandemic. Support from parents, schools, communities and health care providers has been associated with improved mental health outcomes, especially for gender-diverse youth.

“Gender-diverse youth are incredible young people, and — as our study found — many of them live in rural areas,” Kidd said. “It is important that we ensure they have access to support so that they are able to thrive.”

Citation: “The prevalence of gender-diverse youth in a rural Appalachian region”

Research reported in this publication was supported by the Centers for Disease Control and Prevention under Award Number U48DP006391 and the Agency for Healthcare Research and Quality under Award Number 5K12HS02693-03. The content is solely the responsibility of the authors and does not necessarily represent the official views of CDC or AHRQ.

The Prevalence of Gender-Diverse Youth in a Rural Appalachian Region 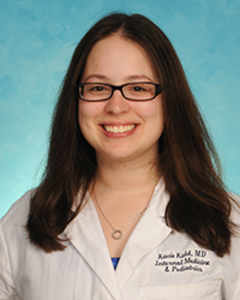