SAN ANTONIO — August 9, 2022 — Southwest Research Institute, a leader in software and systems integration development for automated vehicles and robotics, has deployed an automated shuttle at its 1,500-acre campus.

Capable of ferrying up to 14 passengers, the shuttle features algorithms, sensors, cameras and software that SwRI developed through internal research.

“It is rewarding for our engineers to take the very best technology that SwRI has developed to serve our clients and then embed it into a showcase vehicle that has a practical purpose in our backyard,” said Ryan Lamm, director of SwRI’s Applied Sensing Department.

Using SwRI’s Ranger system, the vehicle has been programmed to autonomously drive unique routes around the grounds. Ranger is a localization tool that uses a ground-facing camera and automation software to precisely maintain its position to within two centimeters on a given route. During operations, a human driver sits behind a steering wheel as an additional safety measure.

“Driverless, fully automated vehicles are still several years away, but this shuttle proves that we are well on our way to such a future,” said Steve Dellenback, vice president of SwRI’s Intelligent Systems Division.

The shuttle is classified as a low-speed vehicle (LSV), operating at less than 50 mph, making it ideal for closed campuses, such as the SwRI headquarters, or roads with lower speed limits. It utilizes a campus map created in the Ranger system with features such as intersections, lanes, stop signs and crosswalks. Routes are dynamically selected by the operator along the map.

It also features artificial intelligence (AI) to classify roadway signs, pedestrians and vehicles and other objects. SwRI has programmed the shuttle with various driving scenarios such as sharing the road with other vehicles, detecting dynamic objects such as pedestrians and cyclists, and determining right of way at intersections.

“The shuttle collects data every time it is on the road, allowing us to continually refine its algorithms to improve reactions in various situations,” said Alexander Youngs, an SwRI senior research engineer who led development of the shuttle.

Additional capabilities include the ability to integrate and share data with intelligent transportation systems and other connected and automated vehicles. The shuttle can be deployed in a convoy of similar vehicles, taking traffic and congestion into consideration for improved mobility.

“This mid-size passenger vehicle presents future opportunities to improve mobility and access to transportation in neighborhoods where large busses cannot travel,” said Dan Rossiter, an SwRI engineer who helped organize the event. “We are thrilled to be able to say San Antonio not only has this capability at SwRI, but that we are helping to develop and deploy similar systems around the globe.”

The shuttle is a working research platform, allowing SwRI to create and upgrade the vehicle with new automation capabilities and innovations. In addition to serving as a functional tour shuttle, it continues to serve as a test bed for other pilot programs for government and industry clients seeking to deploy similar shuttles on both closed campuses and open roads. 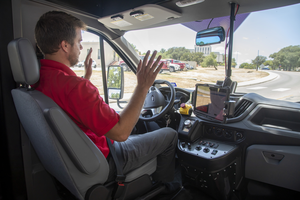 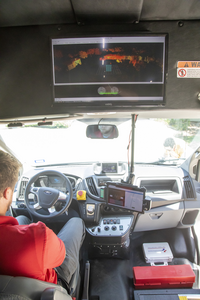