A fruit fly walks on a rolling ball.

As it meanders, Kevin Daly, biology professor at West Virginia University, looks deep into its brain through a specialized microscope.

He’s studying how the brain coordinates movement and sensory function in animals, which may lead to a better understanding of how the different senses — sight, touch, smell, etc. — are integrated by the nervous system in humans.

The National Science Foundation awarded $1.6 million to Daly and collaborator Andrew Dacks, associate professor of biology, to expand on this area of research. Its practical applications could shed light on human disease and human performance, topics of interest to the U.S. Department of Defense and federal health agencies, which have worked with Daly previously.

Daly noted that every behavior a human or animal makes can affect one or more of its sensory systems, which is why they are interlocked with motor systems, working together to move a being through the world.

“You can’t make a move without one or more of your sensory systems being affected,” he said.

Daly is studying corollary discharge circuits, a type of brain circuit that allows animals, including humans, to distinguish external sensory signals from self-generated ones. In simple terms, corollary discharge helps the brain determine whether an image on the retina of the eye is moving across the retina because the eyeball is moving in the socket or something in the environment is moving across the eye’s field of view.

He likens the effect of this mechanism to watching a movie filmed with stabilizers on an otherwise shaky, hand-held camera. Corollary discharge allows the brain to create the perception of a stabilized scene while the body is moving.

“It's why you can look around a screen just by darting your eyes around and you don't get the sense of the world spinning as you do it,” he said. “So, it's essentially a way of coordinating sensory systems with motor systems so that they're constantly interlocked.”

The brain’s sensory side and motor side are reciprocally connected. This can be seen when a hiker is walking across a log. As the motor system directs the legs to walk forward, the sensory system ensures the foot lands in the right place and compensates for slippery spots.

“There’s lots of updating that has to occur,” Daly said. “These neurons are presumably integrating all of that information. It takes care of the discrepancy between goals and the practicality of moving through an environment.”

Daly uses fruit flies to study corollary discharge, as they have a simpler nervous system than humans do. In his lab, he monitors neurons in specific parts of the insects’ brains as they walk on an air-suspended treadmill ball.

“As the animal walks, we're watching the brain actively do what it does, but we're only watching neurons of interest,” he said. “What we can do, essentially, is simultaneously watch brain and behavior in the same animal.”

The data collected on corollary discharge circuits in fruit flies will help researchers understand the corresponding processes in human brains.

Although Daly is still collecting data in the lab, he’s aware of its potential applications.

“While this is basic research, at some level we're using the data as a model to understand ourselves,” he said.

One such avenue looks at the profound failures of a corollary discharge circuit. The result of their failure is the neural basis of sensory hallucinations, such as those experienced by patients suffering from diseases like Alzheimer's and Parkinson’s, but also from extreme fatigue.

“All of the research funding that I have gotten has centered around understanding the neural basis of human disease and also the basis of human performance,” Daly said. “The Air Force was very interested in understanding these neural circuits because they’re sending people into battle spaces, and sometimes those people are in charge of multimillion dollar weapons. You don't want them to make mistakes.”

Fighter pilots, for example, must coordinate with each other effectively, and a failure to do so — perhaps due to fatigue — can be catastrophic.

To study corollary discharge and the fruit flies’ neurons of interest, Daly and his colleagues use two-photon microscopy, which utilize high-powered infrared lasers to monitor deep parts of the insects’ brain for long periods of time. This technology is relatively new to WVU, and it’s both expensive and challenging to put together a system. Daly built four two-photon microscopes with Department of Defense grants and funding from the Office of Sponsored Programs, the Eberly College of Arts and Sciences and the Department of Biology. He did so with the intention of building an undergraduate research training facility, one that would do more than pure research.

“We’re trying to have a broader impact by training students to use this technology,” Daly said, adding that his is the first facility of its type where undergraduates can take a capstone course that will train them in this technology. That training could put WVU students in the front running for a graduate degree program or a post-doctoral training program.

“The idea is that we’ve made available for students a very hi-tech technology that will give them an edge when they're looking for employment,” he said. “It's really one-of-a-kind in that sense.” 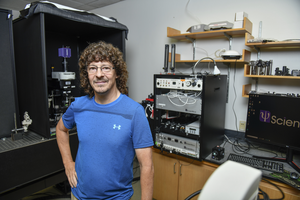 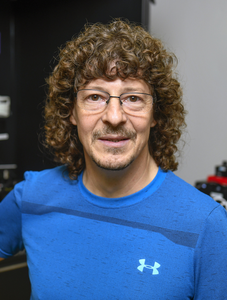