UT Southwestern researchers have identified a molecular pathway responsible for the spread of glioblastoma to surrounding tissue in the brain, as well as an existing drug that curbed tumor growth in animal models. The findings, published in Nature Cell Biology, have led to a clinical trial that could offer new hope to patients with glioblastoma, the most common form of brain cancer in adults that kills hundreds of thousands of people worldwide each year.

“Glioblastoma’s invasive property is perhaps its most formidable barrier to treatment,” said Amyn Habib, M.D., Associate Professor of Neurology, member of both the Harold C. Simmons Comprehensive Cancer Center and Peter O’Donnell Jr. Brain Institute at UTSW, and a staff physician at the Dallas VA Medical Center. “We have identified a pathway that can suppress this cellular invasion, which could offer a new way to increase survival.”

Despite decades of research, the prognosis for most patients with glioblastoma remains dismal, with a median survival after diagnosis of just 15-18 months. Part of the challenge in treating this cancer is its invasive nature: Glioblastoma tumors invade surrounding healthy brain tissue, sending tentacle-like extensions out from the primary tumor that are impossible to remove with surgery alone and difficult to reach with chemotherapy.

Researchers have long considered the epidermal growth factor receptor (EGFR), a protein that sits on the surface of cells, as a driver of this cancer, Dr. Habib explained. In nearly half of glioblastoma patients, the gene that codes for EGFR is amplified, causing glioblastoma cells to produce far more molecular signals spurred by this protein and causing tumor cells to proliferate. Consequently, Dr. Habib added, several clinical trials have focused on inhibiting EGFR – but each has failed to improve the prognosis for glioblastoma.

EGFR on glioblastoma cells can send these signals in two ways: either without prompting, a state known as constitutive signaling, or when stimulated with proteins called ligands. The differences between these two pathways have been considered inconsequential, Dr. Habib said. Thus, glioblastoma patients with amplified EGFR have been grouped together in clinical trials.

In the new study, Dr. Habib and colleagues in the Habib lab and elsewhere showed that when cells with amplified EGFR were stimulated with ligands, this receptor appeared to act as a tumor suppressor, preventing invasion into healthy tissue both in laboratory and animal models. Further experiments showed that a cytoskeletal protein called BIN3 appears to be responsible for inhibiting this invasion. When the researchers dosed animals with amplified EGFR glioblastoma tumors with an FDA-approved arthritis drug called tofacitinib that increases the amount of EGFR ligands and BIN3, tumors remained smaller and were less likely to invade healthy brain tissue. Additionally, these animals survived significantly longer than animals that didn’t receive this drug.

Dr. Habib noted that tofacitinib could offer a new way to extend life for patients with both amplified EGFR and a relatively high level of EGFR ligands, a strategy he and his colleagues will explore in a clinical trial launching in September. For patients without high ligand numbers, he added, strategies previously explored to inhibit EGFR could potentially extend survival.

“These approaches could offer new tools in our arsenal to fight glioblastoma,” Dr. Habib said.

The clinical trial will be conducted at the Simmons Cancer Center.

To find out more about the trial or other cancer trials at Simmons Cancer Center, contact canceranswerline@utsouthwestern.edu. 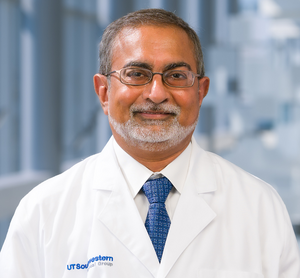