A University of Utah Health-led multi-institutional research center that studies the inner workings and vulnerabilities of HIV, the human immunodeficieny virus that causes AIDS, recently received a five-year, $28 million grant renewal from the National Institutes of Health.

Since its founding in 2007, the CHEETAH Center for Structural Biology of HIV Infection Restriction and Viral Dynamics has published more than 300 research papers that have led to a better understanding of HIV and its potential treatments.

Wes Sundquist, Ph.D., the center’s director and professor and chair of the Department of Biochemistry at U of U Health, is leading 20 research teams from 12 institutions. With the grant renewal, the researchers will focus on:

“The outstanding science stemming from this program is changing an understanding of HIV/AIDS, other viral diseases, and cellular biology,  enabling the development of novel therapeutics such as lenacapavir and D-peptide inhibitors,” says Rachel Hess, M.D., associate vice president for research at U of U Health, referring to two investigational drugs with roots in CHEETAH.

From deep understanding to investigational drugs

Just a half-century ago, HIV infection almost inevitably led to serious illness and death. Today’s antiretroviral therapies can suppress the virus and prevent symptoms, but improvement is still needed. If these drugs aren’t taken daily, the virus can rebound and acquire drug resistance. The medicines can also cause difficult side effects. The underpinnings for two new investigational drugs that could help circumvent these issues are based on years of research by CHEETAH scientists.

Research from Sundquist; Christopher Hill, D.Phil, distinguished biochemistry professor at U of U Health; and other CHEETAH Center labs on the HIV capsid—a structure they found is vital for different steps of the HIV life cycle—laid the groundwork that led the pharmaceutical company Gilead Sciences to identify the capsid inhibitor, lenacapavir. This investigational drug is now in phase 3 clinical trials and is already showing great promise as a potent, long-acting treatment.

“Often people forget that drug development builds from basic research,” Sundquist says. “These are two more cases where that has happened, and it is very satisfying.”

CHEETAH continues to bring an understanding of HIV, related viruses, and host biology in new directions through collaborations between its scientists, who come from a variety of disciplines. “CHEETAH acts as an incubator that fosters new approaches and ideas,” explains Owen Pornillos, Ph.D., a CHEETAH investigator from the University of Virginia who received his doctorate from the U.

Nels Elde, Ph.D., professor of human genetics at U of U Health, turns to evolution for inspiration, noting that many animals are not as susceptible as humans to disease caused by HIV. He is collaborating with fellow CHEETAH scientists to explore whether a gene found in mice and squirrel monkeys that prevents HIV from exiting cells after replicating could become the basis for a new type of antiviral.

“Nature has done seemingly countless billions of experiments that got us to where we are today,” Elde says. “Can we learn from what’s happened and borrow and deploy them in ways that are useful?”

Pornillos, by contrast, takes advantage of his biochemistry expertise to take a different approach. In a collaborative project with several CHEETAH Center members, he is removing the virus from the complex environment of the host cell and bringing it to the test tube. By adding back specific ingredients a few at a time, the team is identifying key virus and host cell components that are essential for early stages of viral infection and replication. Combining this approach with new microscope technologies is allowing them to visualize these steps with unprecedented clarity.

“CHEETAH is committed to doing excellent science and is always planning for where we envision the field will be five years from now,” Pornillos says. “It’s exciting to be a part of it.”

These diverse tactics are providing valuable insights into virology and biology, uncovering targets for new types of therapeutic intervention. 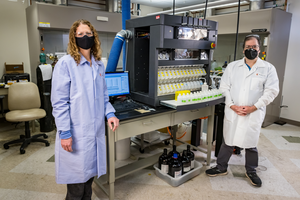 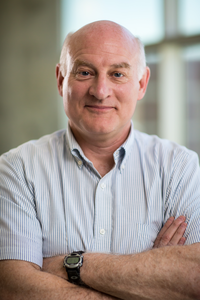