Until now, it has been assumed that the oxygenation of the oceans over geological timescales has mainly been driven by atmospheric oxygen levels. However, a new study published in Nature on June 27 2022  suggests otherwise. Work by scientists at the Biogeosciences Laboratory (CNRS/UBFC), together with their colleagues at the University of California's Department of Earth and Planetary Sciences, shows that the movement of tectonic plates has probably contributed to ocean oxygenation. To demonstrate this, the scientists used a three-dimensional climate model to recreate conditions on Earth from 540 million years ago to the present day, in particular taking into account ocean circulation currents. In their model, the scientists modified the position of the continents while keeping the atmospheric oxygen concentration constant. The result was that the oxygen concentration in the oceans increased, despite a constant level of oxygen in the atmosphere. The new paper thus shows for the first time that atmospheric and oceanic oxygen levels are largely independent of each other. Since oxygen is vital to marine life, these findings reveal the hitherto underestimated role played by plate tectonics in the evolution of biodiversity in the oceans over geological time scales. 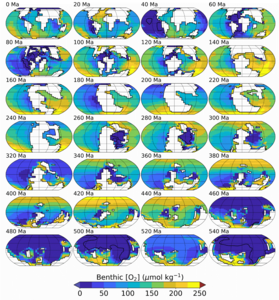 Simulated seafloor oxygen concentration in a series of experiments in which only the configuration of the continents is modified from one period to another.