A container with alcohol heated to 225 °C and a little caustic potash could be an amazingly simple way to solve one of the major challenges facing the green transition:

How can we recycle the huge amounts of polyurethane waste being churned out all over the world?

That it can be done so simply came as a surprise to the researchers from Aarhus University, who have developed and patented the method as part of the Danish RePURpose consortium. The results have just been published in ACS Sustainable Chemistry and Engineering.

Before returning to the procedure and the surprise, let us just introduce the challenge:

Irreplaceable material is not sustainable

Polyurethane (PU) is a group of advanced plastic materials with many different properties and even more applications. It is found in mattresses, furniture, refrigerators, shoes, toys, paints, fillers, insulation, cars, wind turbines, aircrafts and much more.

Unfortunately, enormous amounts are also found in landfills, as it is difficult to recycle PU waste.

This is because the chemical structure, which gives PU its strength, means that it cannot be melted. For this reason, it is not possible to simply mould it into new products like we can with many other plastic materials.

The need to recycle PU is both immense and imperative, because the current situation is not sustainable.

A simple chemical reaction now appears to be part of the solution. If PU is boiled in the liquid described above for a couple of hours, it is deconstructed (depolymerised) into its original components (amine precursors and polyols) and in such unadulterated form that they have the potential to compete with the raw materials used by manufacturers to produce PU.

The reaction requires an autoclave (a sort of pressure cooker) to reach the 225 °C, but otherwise no high pressure or expensive chemicals are necessary. tert-Amyl alcohol is a relatively inexpensive solvent, and the strongly alkaline caustic potash is also relatively low-cost.

The researchers themselves are surprised that it can be done so simply.

They have been working on the basic principle for some time as part of the RePURpose consortium, but with other, more expensive chemicals. In 2021, the consortium reported that it had succeeded in breaking down PU into its original components using either an iridium-based catalyst or a manganese-based catalyst in combination with hydrogen. The news resonated throughout the plastics industry.

"However, iridium is a rare and expensive element, and manganese is not entirely cheap either. The idea of doing the depolymerisation without a metal came when we discovered a background reaction that afforded both amine and polyol in the absence of a metal catalyst – albeit not as effectively as you would wish. But when we changed the alcohol, temperature and base, we achieved full depolymerisation. This was a real eye-opener, because it makes the process much cheaper and more scalable," says Steffan Kvist Kristensen, an assistant professor at the Interdisciplinary Nanoscience Center (iNANO) at Aarhus University.

The researchers hope that the new technology can form the basis for a circular economy for the polyurethane industry, so that PU can be produced, used, recycled and reused into new PU materials.

Some PU waste is recycled already, but not in a circular fashion. It can be granulated and used as fillers by the construction industry.

A very small amount is chemically depolymerised only to extract polyols, which are one of the main components of PUR, but the technologies mainly used by the industry do not produce the same quality as the original substances.

Some of the waste is incinerated at power stations, but this is not climate friendly as, for the most part, PU is based on fossil feedstocks. In addition, a number of PU materials produce toxic substances such as isocyanates, hydrogen cyanide and carbon monoxide when they are incinerated.

However, the vast majority of the waste is regrettably landfilled.

The authors declare the following competing financial interest(s): Aarhus University and Danish Technological Institute have filed a patent application related to the findings described in this manuscript. 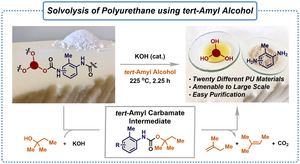