Dogs and humans clearly have a special bond. But do dogs, like humans, produce more tears at times when they are flooded with emotion? A new study reported in Current Biology on August 22—which may be the first to look at this question—says that, indeed, the eyes of our canine companions do well up with tears. In fact, it happens regularly when they’re reunited with you.

“We found that dogs shed tears associated with positive emotions,” says Takefumi Kikusui of Azabu University in Japan. “We also made the discovery of oxytocin as a possible mechanism underlying it.”

Kikusui and colleagues made the discovery after one of his two standard poodles had puppies 6 years ago. He noticed that, when his dog was nursing the puppies, something changed in the dog’s face; there were tears. Those tears don’t fall as they often do in humans but they do get teary eyes.

“That gave me the idea that oxytocin might increase tears,” Kikusui says.

Oxytocin, he explained, is known as the maternal or “love hormone.” The researchers also knew from earlier observations that oxytocin is released in both dogs and their owners during interactions. So, they decided to run a reunification experiment and see if it brought dogs to tears.

First, they used a standard test to measure dogs’ tear volume before and after reuniting with their owners. They found that tear volume indeed went up when they got back together with the familiar human and not with a person they didn’t know.

When they added oxytocin to the dogs’ eyes, their tear volume also went up. That finding supports the idea that the release of oxytocin plays a role in tear production when dogs and their people get back together.

They also asked people to rate pictures of dogs faces with and without artificial tears in them, and it turned out that people gave more positive responses when they saw dogs with teary eyes. These findings suggest that dogs’ tear production helps to forge stronger connections between people and their dogs.

Kikusui says that the findings came as a surprise. “We had never heard of the discovery that animals shed tears in joyful situations, such as reuniting with their owners, and we were all excited that this would be a world first!”

In this case, it seems dogs produce tears in situations that humans would consider “happy.” They haven’t yet tested whether dogs produce tears in response to negative emotions, too. They don’t know yet, either, if dogs make tears when they get back together with other dogs. They hope to learn if this response also has a social function in the dog world. But, for now, they say it seems to have clear implications for the dog-human bond.

“Dogs have become a partner of humans, and we can form bonds,” Kikusui says. “In this process, it is possible that the dogs that show teary eyes during interaction with the owner would be cared for by the owner more.”

Current Biology, Murata et al. “Increase of tear volume in dogs after reunion with owners is mediated by oxytocin” https://www.cell.com/current-biology/fulltext/S0960-9822(22)01132-0

Dogs cry more when reunited with their owners 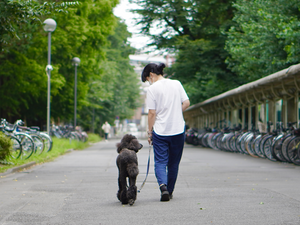 Dog on a walk