New research reveals more about the magnitude of January eruption, as researchers call for better preparedness

The initial tsunami wave created by the eruption of the underwater Hunga Tonga Ha’apai volcano in Tonga in January 2022 reached 90 metres in height, around nine times taller than that from the highly destructive 2011 Japan tsunami, new research has found.

An international research team says the eruption should serve as a wake-up call for international groups looking to protect people from similar events in future, claiming that detection and monitoring systems for volcano-based tsunamis are ’30 years behind’ comparable tools used to detect earthquake-based events.

Dr Mohammad Heidarzadeh, Secretary-General of the International Tsunami Commission and a senior lecturer in the University of Bath’s Department of Architecture & Civil Engineering, authored the research alongside colleagues based in Japan, New Zealand, the UK and Croatia.

By comparison, the largest tsunami waves due to earthquakes before the Tonga event were recorded following the Tōhoku earthquake near Japan in 2011 and the 1960 Chilean earthquake, reached 10 metres in initial height. Those were more destructive as they happened closer to land, with waves that were wider.

Dr Heidarzadeh says the Tonga tsunami should serve as a wake-up call for more preparedness and understanding of the causes and signs of tsunamis cause by volcanic eruptions. He says: “The Tongan tsunami tragically killed five people and caused large scale destruction, but its effects could have been even greater had the volcano been located closer to human communities. The volcano is located approximately 70 km from the Tongan capital Nuku'alofa – this distance significantly minimized its destructive power.

“This was a gigantic, unique event and one that highlights that internationally we must invest in improving systems to detect volcanic tsunamis as these are currently around 30 years behind the systems we used to monitor for earthquakes. We are under-prepared for volcanic tsunamis.”

The research was carried out by analysing ocean observation data recordings of atmospheric pressure changes and sea level oscillations, in combination with computer simulations validated with real-world data.

The research team found that the tsunami was unique as the waves were created not only by the water displaced by the volcano’s eruption, but also by huge atmospheric pressure waves, which circled around the globe multiple times. This ‘dual mechanism’ created a two-part tsunami – where initial ocean waves created by the atmospheric pressure waves were followed more than one hour later by a second surge created by the eruption’s water displacement.

This combination meant tsunami warning centres did not detect the initial wave as they are programmed to detect tsunamis based on water displacements rather than atmospheric pressure waves.

The research team also found that the January event was among very few tsunamis powerful enough to travel around the globe – it was recorded in all world’s oceans and large seas from Japan and the United States’ western seaboard in the North Pacific Ocean to the coasts within the Mediterranean Sea.

The paper, co-authored by colleagues from New Zealand’s GNS Science, the Association for the Development of Earthquake Prediction in Japan, the University of Split in Croatia and at London’s Brunel University, was published this week in Ocean Engineering.

Dr Aditya Gusman, Tsunami Modeller at the New Zealand-based geoscience service, says: “The 2018 Anak Krakatau volcano and 2022 Hunga Tonga-Hunga Ha'apai volcano eruptions clearly showed us that coastal areas surrounding volcano islands are at risk of being hit by destructive tsunamis. Although it may be preferable to have low-lying coastal areas completely clear from residential buildings, such a policy may not be practical for some places as volcanic tsunamis can be considered infrequent events.”

Co-author Dr Jadranka Šepić, from the University of Split, Croatia, adds: “What is important is to have efficient warning systems, which include both real-time warnings and education on what to do in a case of a tsunami or warning - such systems save lives. In addition, at volcanic areas, monitoring of volcanic activity should be organized, and more high-quality research into volcanic eruptions and areas at hazard is always a good idea.”

The paper Estimating the eruption-induced water displacement source of the 15 January 2022 Tonga volcanic tsunami from tsunami spectra and numerical modelling is published in Ocean Engineering. https://doi.org/10.1016/j.oceaneng.2022.112165

Images are available at https://www.dropbox.com/sh/vyf5svynzk03mtx/AADjTY_3tpap-QemVwjOzPtja?dl=0

The University of Bath is one of the UK's leading universities both in terms of high-impact research and our reputation for excellence in education, student experience and graduate prospects.

Bath is in the world’s top 100 universities for Graduate Employability in the QS World University Rankings 2022. Overall student satisfaction in the National Student Survey 2021 was 10% above the national average, with Bath 1st in England & 2nd in the UK when comparing Guardian University Guide institutions.

In the Research Excellence Framework (REF) 2014 research assessment, 87 per cent of our research was defined as ‘world-leading’ or ‘internationally excellent’. We conduct innovative research into sustainability, health and wellbeing, and digital solutions. From developing fuel-efficient cars of the future, identifying infectious diseases more quickly, to using machine learning to help improve healthcare, research from Bath is helping to change the world for the better. Find out more: http://www.bath.ac.uk/topics/research/ 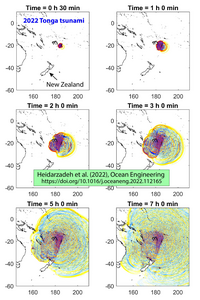 Snapshots of tsunami propagation at different times for the 15 January 2022 Tonga tsunami from our source model S6.