(Millbrook, NY) Understanding how forests are responding to climate change is critical to planning effective forest management and climate policy.

A new study out today in the first issue of Environmental Research: Ecology, published by IOP Publishing, assessed effects of past and current climate variability on global forest productivity. The work highlights sensitive regions where forests may be most at risk as the planet warms and temperatures become more extreme. The framework can help set conservation priorities, support forest adaptation efforts, and improve carbon accounting.

Lead author Winslow Hansen, a forest ecologist at Cary Institute of Ecosystem Studies, says, “Global climate patterns are becoming increasingly variable. This means more extremes, which threaten forest health and productivity. They say adversity makes you stronger. Here, we were essentially testing that adage for trees. Are forested regions that experienced more variable conditions in the past better prepared to tolerate variable climate now and in the future?”

The team looked at global climate records for two 20-year study periods, 1950-1969 and 2000-2019, to identify regional trends in climate variability. Records included monthly mean, minimum, and maximum temperatures, total precipitation, and mean vapor pressure deficit (a measure of how dry the air is). Global data were gridded at a 0.5° spatial resolution.

By pairing climate data with satellite records of forests, they were able to assess how climate variability in the past and present shapes current forest productivity. They found that regions where temperature was more variable in the past continue to experience more temperature variability today. Forests in these regions tend to better tolerate this increasing variability.

Coauthor Naomi Schwartz of University of British Columbia says, “We are seeing global temperature change in two distinct ways: average temperatures are rising and temperature is becoming more variable year to year. These indicators are changing with varying degrees of intensity in different regions. In some places, rising mean temperature is likely to have a greater impact on forests than increasing year to year temperature variability, and vice versa.”

Hansen explains, “While climate models predict relatively modest overall warming in the tropics through the 21st century, year-to-year temperature variability is expected to substantially increase. Our analysis indicates that tropical forests could be harder hit by effects of increasing variability than rising mean temperatures.

Hansen says, “We often think of climate change as a monolithic phenomenon. But in reality, climate is changing in many different ways all at once, and we expect this to cause really different impacts across ecosystems, including forests. Our study highlights how forest adaptation strategies need to be developed that account for the nuanced effects of climate change.”

Hansen concludes, “As climate conditions become increasingly variable, there is a critical need to identify where and how forests are changing. Our analysis offers a framework to hone this understanding on a global scale – helping to improve targeted conservation policies that protect forests, their inhabitants, and the essential services they provide.”

Naomi B. Schwartz – The University of British Columbia 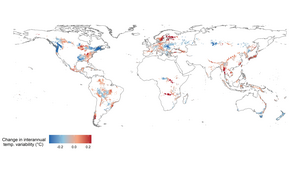