PITTSBURGH, Sept. 1, 2022 – The primetime television drama “This Is Us” drew millions of viewers to a compelling narrative about Alzheimer’s disease and family caregiving – and viewers thought it helped reduce stigma around dementia and motivate family discussions about plans for aging, according to new research led by the University of Pittsburgh School of Public Health.

Published today in the Journal of Health Communication, the Pitt study is the first to examine a television entertainment narrative about Alzheimer’s disease, using both survey and focus group results to determine its influence on viewers. The results suggest that entertainment narratives have the power to positively impact those affected by Alzheimer’s and the importance of partnerships between public health agencies and the entertainment industry to address health issues.

“Given that the average U.S. adult spends about 2,000 hours watching primetime television per year, but only an hour with a health care professional, it’s critical for clinicians and public health professionals to understand how television narratives impact health decisions,” said lead author Beth Hoffman, Ph.D., M.P.H., postdoctoral associate in the Department of Behavioral and Community Health Sciences at Pitt Public Health.

“Our findings demonstrate that the entertainment industry need not shy away from complex topics,” she said. “About 9 million U.S. adults have lived experience with Alzheimer’s disease and caregiving, and our work found that the storyline on ‘This Is Us’ helped them feel seen.”

“This Is Us” portrayed the fictional Pearson family, primarily focusing on the mother, Rebecca, and her triplets, Kate, Kevin and Randall. In the fourth season, Rebecca experienced memory decline and was diagnosed with mild cognitive impairment likely due to Alzheimer’s disease. Kevin and Randall clashed over Randall’s insistence that Rebecca move cross-country to participate in a clinical trial for people with Alzheimer’s disease.

The storyline was developed in consultation with Hollywood, Health & Society, a University of Southern California program that for more than 20 years has served as a free resource to the entertainment industry, providing fact-based information for TV storylines on health, safety and security. Hollywood, Health & Society met with “This Is Us” writers regularly over the course of three seasons to help them ensure the topic was portrayed accurately and authentically. This included writers’ room briefings, script reviews and conversations between Mandy Moore – who played Rebecca – and Alzheimer’s disease experts.

"We were honored to work with ‘This Is Us’ to inform this storyline and many others throughout the show’s six-year run,” said Kate Langrall Folb, M.Ed., director of Hollywood, Health & Society. “We know from decades of research that viewers learn from what they see on TV. That’s why it’s so essential for shows to accurately portray the complexities of living with and caring for those affected by diseases like Alzheimer’s."

Following the fourth season finale, Hoffman’s team administered an online survey to more than 700 viewers and then conducted follow-up focus groups with a dozen of those participants. This “mixed methods” approach – guided by Jessica Burke, Ph.D., the study’s senior author and Pitt Public Health professor – allows scientists to better understand the numerical data gained from broad surveys through follow-up discussions.

Survey responses show viewers strongly identified with both Randall and Kevin, indicating they could see both sides of different positions on treatment and care of someone with Alzheimer’s disease. Survey respondents also professed high levels of support for medical research while still expressing a desire to respect the decision of the affected family member on whether to participate in a clinical trial. More than 43% of respondents had a friend or close relative previously diagnosed with dementia or Alzheimer’s disease.

The focus group discussions further elucidated these findings. For example, viewers empathized with Randall’s belief that a clinical trial would save Rebecca’s life, but they could also see this as overly optimistic, ultimately supporting Kevin’s desire not to override their mother’s decision about participating. Participants also shared their belief that the disagreement between Kevin and Randall over Rebecca’s care would encourage viewers to have family discussions about advanced care planning.

“Obviously it is rewarding to hear that our show has had a positive influence on perception and understanding of Alzheimer’s disease,” said Dan Fogelman, creator, showrunner and writer of “This Is Us.” “Our incredible writers took great care to get the details right here, as multiple members of our staff had been directly touched by the disease. I’d be remiss if I didn’t add that we couldn’t have attacked the storyline without help from Hollywood, Health & Society, a guiding force with any medical-based research we needed.”

The work was supported by a grant from the SCAN Foundation received by Hollywood, Health & Society.

About the University of Pittsburgh School of Public Health

Founded in 1948, the University of Pittsburgh School of Public Health is a top-ranked institution of seven academic departments partnering with stakeholders locally and globally to create, implement and disseminate innovative public health research and practice. With hands-on and high-tech instruction, Pitt Public Health trains a diverse community of students to become public health leaders who counter persistent population health problems and inequities. 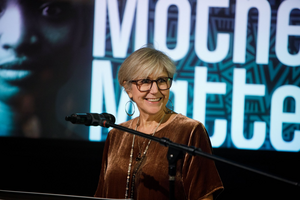