Sea ice levels in the Arctic Ocean are rapidly declining, thanks to global warming. Now, to understand and forecast the growth and decay of the ice, researchers from Japan and collaborating countries have conducted a survey in the Arctic Ocean to investigate the influence of ocean heat on sea ice in the ice-ocean boundary layer. Their findings provide insights into the mechanisms of Arctic sea ice decline for making accurate predictions in the future regarding the global climate.

The sea ice (a term for ice that is not attached to the shoreline) in the Arctic Ocean is currently at an all-time low, owing to global warming. Scientists have previously attempted to study the ice in this region; however, owing to its constant shifting by strong surface winds and ocean currents, it is difficult to monitor continuously.

The growth and decay of the sea ice can be influenced by the interaction of the drifting ice and the near-surface ocean layer, where turbulent heat and salt fluctuations govern the formation of ice. Turbulence at the ice-ocean boundary layer (IOBL), which is the transition zone between the sea ice and seawater, is also shaped by the intrusion of fresh water from melting sea ice and the physical exclusion of brine during ice formation. While some research has been conducted on the mechanisms of sea ice formation, the combined effect of mechanical and buoyancy-driven forces on this process remain poorly understood.

Now, a joint team of researchers from The University of Tokyo, Hokkaido University, and the National Institute of Polar Research have utilized data collected during the international ship-based MOSAiC observational expedition, to examine the Arctic IOBL as it transitioned from melting to refreezing in real time. The team was led by Dr. Yusuke Kawaguchi of The Atmospheric and Ocean Research Institute at The University of Tokyo and included Dr. Daiki Nomura from Hokkaido University and Dr. Jun Inoue from the National Institute of Polar Research.

“Owing to the complex patterns of heat and energy transfer, the physics of the cold oceans is complicated. Our objective was to quantify the thermodynamic growth and decay of the sea ice while incorporating effects of heat and salt exchange with near-surface water due to turbulent forces.”, says Dr. Kawaguchi of his motivation to complete this body of work. The team’s findings have been published in the Journal of Geophysical Research-Oceans. This paper was made available online on July 20 2022 and was published in Volume 127 Issue 8 of the journal on 19 August 2022.

The team combined various datasets, including observations of air, sea ice, and ocean properties from the ice floe. These were collected during the final leg of the MOSAiC study, which was an international project undertaken to study the climate, ocean, and sea ice characteristics of the Arctic Ocean.

From their survey, the team concluded that the present Arctic sea ice was more prone to melting in summer and to freezing in autumn and early winter than before. When probed on the main findings, Dr. Kawaguchi, the lead author, talks about the characteristics of seawater and sea ice that drive this fascinating phenomenon. “Our first discovery was that in the summer, strong winds cause the mixing of water where the ice and ocean meet. We were able to show that enhanced heat transfer occurs right below the sea ice,” he explains.

Their second finding concerns the drop in the salinity of the seawater as it mixes with the meltwater from the sea ice. “As melt water accumulates beneath the sea ice, salinity of sea water decreases and then the freezing temperature increases. This terminates the melting of sea ice at an earlier timing because water gets easier to freeze.” says Dr. Kawaguchi.

The team is excited by the implications their findings have on the field of polar oceanography, particularly in the context of climate change. Presently, the team is developing a device that simultaneously measures sea ice movement and salinity at the IOBL, with the hope that it will capture more data to paint a clearer picture of the fluctuations in the Arctic sea ice.

“The extent of the Arctic sea ice may affect the regional climate in distant places, like Japan, via atmospheric disturbances. We believe that studying the sea ice will allow us to better predict future changes in the Earth’s climate.”, concludes Dr. Kawaguchi.

About Assistant Professor Yusuke Kawaguchi from AORI, The University of Tokyo

Dr. Yusuke Kawaguchi is an Assistant Professor in the Atmospheric and Ocean Research Institute at The University of Tokyo. His lab is part of the Division of Ocean-Earth System Science and his research spans themes across physical oceanography, polar oceanography, and cryospheric science. He has published 38 peer reviewed articles since 2008. As a principal investigator, he is currently overseeing the development of an observatory network to study the heat balance of sea ice based on the ice-ocean boundary theory. 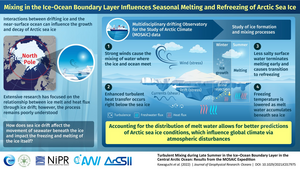