In most of the animal world, there’s a sad trade-off to make: The more babies you have, the shorter you live.

But ants buck the system. The queens — the only individuals in a nest that reproduce — also live five, 10, up to 30 times longer than their genetically identical worker sisters. How do they pull off what the rest of animalkind cannot?

A new study from University of Florida biologist Hua Yan and his colleagues at New York University finds that ant queens implement a dual-control system for insulin, the metabolism-controlling hormone that explains much of the trade-off between reproduction and lifespan. Queens massively boost their insulin production, which promotes egg development. But their ovaries also produce an insulin blocker that slows down the aging process.

“Hopefully this finding allows us to better understand the aging process in many animals,” said Yan, an assistant professor of biology at UF who also studies how ants communicate with pheromones to organize their society.

Whether mammals, including humans, could ever benefit from partially blocking the insulin pathway remains an open question. Calorie restriction, which decreases insulin production, can increase lifespan in mammals but hurts reproduction.

The research team published their work on Sept. 1 in Science. Yan and NYU researchers Comzit Opachaloemphan and Francisco Carmona-Aldana led the study, which was supervised by NYU professors Claude Desplan and Danny Reinberg.

They studied Harpegnathos saltator ants, also known as Indian jumping ants, because of a helpful transformation the ants undergo. When a queen dies, the remaining workers duel to decide which ants will become new pseudo-queens capable of laying eggs. The pseudo-queens acquire longer lifespans, but the process is also reversible if they encounter a true queen. That gave Yan and the research team the perfect system to study how lifespan extension can be switched on and off.

They discovered that pseudo-queens produce much more insulin, which they expected. Insulin helps convert food into energy, and reproduction is an energy-intensive process.

“It’s straightforward, the pseudo-queen is reproductive, so they need insulin. But insulin normally shortens lifespan, yet they have much longer lifespan – why?” Yan pondered. “There must be something in the insulin signaling of the ants that differentially regulates reproduction and longevity.”

The research team found this extra layer of control in the form of an insulin blocker, called Imp-L2, which is produced by the newly active ovaries of the pseudo-queen. This insulin blocker slows down the part of the insulin pathway normally responsible for accelerating the aging process, but leaves the reproduction-boosting side of insulin signaling intact.

In a sense, the ants get to have their cake and eat it too, coupling egg-laying with a long life.

Insulin signaling in the long-lived reproductive caste of ants 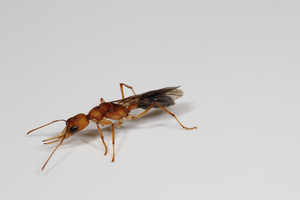 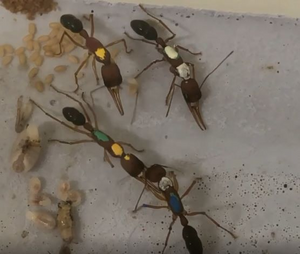