An international team has discovered and named eight new day gecko species from Madagascar, and each of them is no longer than your pointer finger.

Researchers working in the rainforests of Madagascar have been studying the tiny brown Lygodactylus geckos in the subgenus Domerguella for decades. All this time they have been trying to understand their distribution and evolution, thinking that there were just five species. Now, based on analysis of their DNA and careful examination of their scales and proportions, an international team has discovered that there may be as many as seventeen! They have named eight new species in the journal Zootaxa.

In some places, the team found there were three or four different species found in the same place. ‘This was a remarkable discovery’ says Professor Miguel Vences of the Technische Universität Braunschweig, Germany, first author on the study, ‘On Montagne d’Ambre in the north of Madagascar we thought we were collecting just one species, but now we find there are four. Four different, closely related species that are almost indistinguishable to us, occurring together in the same place, apparently without interbreeding—this is exceptional, even for Madagascar.’

Indeed, Madagascar has remarkably high levels of reptile diversity and endemism, and over 150 new species have been discovered and named in the last thirty years. ‘These results highlight how important it is that we continue to collect samples across Madagascar, even of species we think we understand,’ says Dr Frank Glaw, Curator of Herpetology at the Zoologische Staatssammlung München in Munich, Germany, ‘There is still very much more to discover.’

Many of the new reptile and amphibian species described from Madagascar in recent years have been tiny, and the new species are no exception. ‘Domerguella are tiny, at just five to seven centimetres (or roughly two inches) from the nose to the tip of the tail. We think that their small size may play a role in the way they speciate,’ says Dr Mark D. Scherz, Curator of Herpetology at the Natural History Museum of Denmark and last author on the study, ‘because small animals are generally less able to move from one area to another, and are more likely to get isolated by barriers like rivers cropping up between populations. This could explain why we have seen these kinds of patterns in the tiny frogs, chameleons, and now also geckos that we have been studying in Madagascar.’

The new results also reveal how threatened some Domerguella species have been, even without having had scientific names before. ‘The five species we knew before were mostly thought to be unthreatened, but the eight new species are all either probably endangered or critically endangered’ says Dr Fanomezana Ratsoavina, manager of the Unit for Zoology and Animal Biodiversity at the University of Antananarivo in Madagascar. ‘This shows how important it is to continue to work to discover, describe, and assess the conservation status of the wildlife of Madagascar.’ 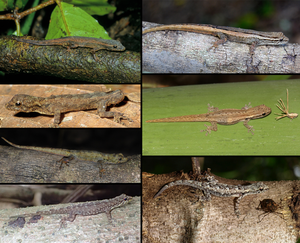 Seven of the new species