Researchers at Linköping University have used computer simulations to show that stable aromatic molecules can become reactive after absorbing light. The results, published in the Journal of Organic Chemistry, may have long-term applications in such areas as the storage of solar energy, pharmacology, and molecular machines.

“Everyone knows that petrol smells nice. This is because it contains the aromatic molecule benzene. And aromatic molecules don’t just smell nice: they have many useful chemical properties. Our discovery means that we can add more properties”, says Bo Durbeej, professor of computational physics at Linköping University.

Researchers at Linköping University have now used computer simulations to show that it is possible to activate aromatic molecules using light. Reactions of this type are known as photochemical reactions.

“It is possible to add more energy using light than using heat. In this case, light can help an aromatic molecule to become antiaromatic, and thus highly reactive. This is a new way to control photochemical reactions using the aromaticity of the molecules”, says Bo Durbeej.

The result was important enough to be highlighted on the cover of the Journal of Organic Chemistry when it was published. In the long term, it has possible applications in many areas. Bo Durbeej’s research group focuses on applications in the storage of solar energy, but he sees potential also in molecular machines, molecular synthesis, and photopharmacology. In the latter application, it may be possible to use light to selectively activate drugs with aromatic groups at a location in the body where the pharmacological effect is wanted.

The researchers tested the hypothesis that it was the loss of aromaticity that led to the increased reactivity by examining the opposite relationship in the simulations. In this case, they started with an antiaromatic unstable molecule and simulated it being subject to light irradiation. This led to the formation of an aromatic compound, and the researchers saw, as expected, that the reactivity was lost.

“Our discovery extends the concept of ‘aromaticity’, and we have shown that we can use this concept in organic photochemistry”, says Bo Durbeej.

The study has been funded by the Olle Engkvist Foundation, the Swedish Research Council, ÅForsk, and the Carl Trygger Foundation. The computations were carried out at the National Supercomputer Centre at Linköping University with support from the Swedish National Infrastructure for Computing (SNIC).

The article: Modulating the Photocyclization Reactivity of Diarylethenes through Changes in the Excited-State Aromaticity of the π-Linker, Baswanth Oruganti, Jun Wang, and Bo Durbeej, Journal of Organic Chemistry, published online 23 August 2022, DOI: 10.1021/acs.joc.2c01172

The Journal of Organic Chemistry 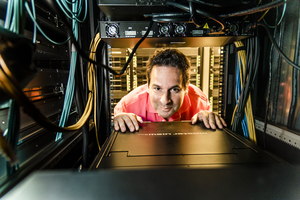