A research team of RIKEN center for Advanced Photonics and the University of Tokyo has developed a novel type of interferometer to resolve the fringes originating from both optical interference of attosecond pulses and quantum interference of electronic states in a matter. They have demonstrated the feasibility of their interferometer by post-generation splitting of high-order harmonic pulse with the experiment using helium atom sample and present their work in the journal Ultrafast Science.

Ramsey-type interference among multiple quantum states in the time domain is one of the crucial techniques to investigate the quantum dynamics in a matter. Most importantly, much higher photon energy is needed for resolving much faster dynamics in this interference technique, because the fringe period of the interference is inversely proportional to the photon energy. As a result, the photon energy of more than 20 eV, which is equivalent to the wavelength region in the extreme ultraviolet (XUV), is required for resolving the quantum dynamics in attosecond regime. High-order harmonic (HH) pulse of intense infrared-visible femtosecond laser pulse is a promising light source for this technique. “However, it was very difficult to generate a pair of coherent HH pulse” says Nabekawa in RIKEN. “Because we cannot fabricate a half mirror in the XUV wavelength region as is usually fabricated in the visible wavelength region”. Up to now, researchers have made use of a pair of coherent fundamental femtosecond pulse delivered from a conventional interferometer before generating the HH pulse. “The time delay between the pulse pair cannot approach to 0”, Nabekawa points out a drawback of the conventional scheme. “This is due to the strong perturbation to the highly nonlinear process of the HH generation at the temporal overlap of the fundamental laser pulse pair.”

The research team have resolved this issue by putting a newly developed interferometer behind the HH generator to directly split the HH pulse into a pair. In this interferometer, the HH pulse is spatially split with reflections near around boundaries of two parallel-configured Si mirrors situated as closely as possible. Therefore, the interference of the HH pair emerges in the spatial profile of the focused HH pulse pair. “Key idea is that we pick up the atoms only in the region where the HH pulse pair spatially interferes,” explains Matsubara in U. Tokyo. “To do so, we have tightly focused the third harmonic (TH) pulse into the interfering region of the HH pulse pair as a probe pulse.”

In the experiment, the TH pulse is separated in front of the HH interferometer, goes through a Mach-Zehnder type interferometer with adjustable delay, and is combined with the HH pulse pair. The HH pulse pair and the copropagating TH pulse are focused in a helium gas jet injected in an electron spectrometer, which records the angular distributions and the kinetic energy spectra of electrons detached from helium atoms with ionization. A helium atom on the ground electronic state is excited to the 2p state by absorbing one photon of the 13th HH pulse, and then, photoionized by the TH probe pulse irradiated approximately 184 fs after. “We have clearly distinguished the 2p electron spectrum from the other electron spectra by analyzing angular distribution.” Ishikawa of U. Tokyo, who has been responsible for the two-electron full-dimensional ab initio calculation of the angular distribution of the 2p electrons, takes pride in his theoretical prediction.

The yield of the 2p electrons has modulated upon scanning delay between the two HH pulses. The modulation period has been 200 as, which is equivalent to the inverse of the excitation energy to the 2p state, 21.2 eV. This is the evidence of Ramsey-type interference in attosecond regime. “The interference fringes continue from the delay time 0 to the delay time much longer than the coherence time of the 13th HH pulse. This is the seamless transition from the optical interference of the XUV pulses to the quantum interference of the electronic states never observed before,” emphasizes Nabekawa.

Matsubara tells a future prospect, “This novel approach should facilitate the investigation of the ultrafast temporal evolution of the coherence between electronic states coupled with nuclear dynamics in a molecule.” He expects the observations of detuning, destruction, and revival of the attosecond electronic interference caused by the nuclear motions in a molecule. 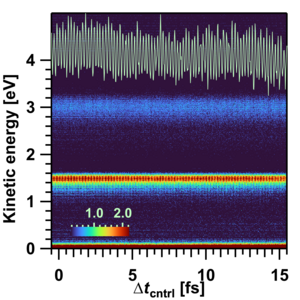