In this study, we have successfully developed a new initiating system for the polymerization of diazoacetates. More specifically, we have demonstrated that the newly prepared Pd(0) complexes bearing N-arylmaleimide as a ligand, in conjunction with a borate such as NaBPh4, are effective in producing a good yield of polymers by the polymerization of diazoacetates; in particular, the polymerization proceeds in a highly uniform manner with respect to initiation, propagation, and termination. The most remarkable feature we found about the initiating system [Pd(N-arylmaleimide)/NaBPh4] is that an N-arylmaleimide molecule, which was originally coordinated on the Pd center, was incorporated into the α-chain end of the resulting polymer almost quantitatively. Accordingly, the initiating system will enable us to introduce a variety of functional groups at the α-chain end of poly(alkoxycarbonylmethylene)s by using N-substituted maleimide bearing a (protected) functional group. The findings described here will contribute to broadening the generality and utility of diazoacetate polymerization, which has been gaining importance as a useful method for preparing sp3-carbon-based main-chain polymers.

Development of a new end-functionalization technique in polymer synthesis 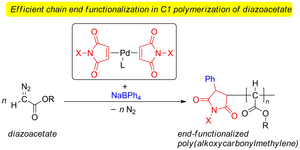