Scientists have long pondered how and when the evolution of prokaryotes to eukaryotes occurred. A collaborative research team from Tohoku University and the University of Tokyo may have provided some answers after discovering new types of microfossils dating 1.9 billion years.

Details of their findings were published in the journal Precambrian Research on August 19, 2022.

The Gunflint Formation traverses the northern part of Minnesota into Ontario, along the northwestern shores of Lake Superior. The first bacterial microfossils were discovered there in 1954, with Gunflint microfossils now recognized as a 'benchmark' in the field of life evolution.

Seeking to reassess the microfossils, the research team carried out a geological survey of the Gunflint Formation and collected microfossil-containing rocks. After investigating the microfossils' three-dimensional shape and size distribution, they unearthed five types of microfossils: colonial, ellipsoidal, intracellular inclusion-bearing (ICI), spinous and tail-bearing types.

"The newly found ones are more functional," said the leader of the team Kohei Sasaki, a research fellow at Tohoku University. "The ellipsoidal microfossils resemble modern cyanobacteria, which evolved to improve their tolerance to harsh environments; whereas chemical analysis showed that the ICI microfossils were packed with nutrients."

This evidences that the microorganisms evolved to store nutrients that could weather environmental stress.

Meanwhile, the spinous and tail-bearing types demonstrated features advantageous for motility and nutrient transfer among cells, a typical morphological feature of eukaryotes.

"Although the size of cells is prokaryote by definition, they had already developed eukaryotic functions," added Sasaki. This indicates that prokaryotes may have begun diversifying their functions and preparing for evolution before the emergence of eukaryotes 1.8 - 1.6 billion years ago.

The team speculates that the unique environment at the time facilitated the divergent expansion of microbial forms. The collision of land masses accelerated oxidative weathering from the fresh continent to the ocean. This increased the nutrient supplies and raised seawater temperatures, making the marine environment unstable.

"Under such conditions, microorganisms probably diversified their morphology as a survival strategy, paving the way for eukaryotes to evolve," continued Sasaki.

Sasaki and his team's landmark discovery will help scientists pinpoint the timing and factors that ushered in the evolution of prokaryotes to eukaryotes, providing not only geological significance, but aiding the fields of life sciences and evolutionary biology as well. 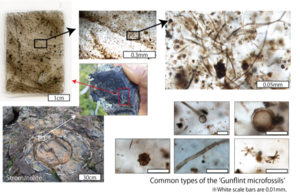 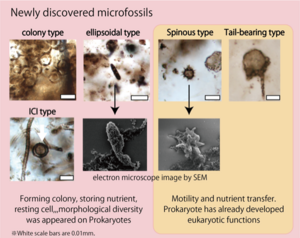