A research team of ETRI(Electronics and Telecommunications Research Institute) has developed international standards for microgrid technology that maximizes energy usage efficiency through the convergence of electrical technology and information and communication technology(ICT). The establishment of a stable and efficient energy utilization system is expected to serve as a solid foundation for the realization of carbon net zero.

ETRI said 2 international standards for energy storage system (ESS) and demand response (DR), which are the key elements of the microgrid system, have been approved by the Technical Committee of the Electrical Energy Storage System (TC120), Industrial Process Measurement, Control and Automation (TC65) of the International Electrotechnical Commission (IEC).

The importance of smart grid1) technology is getting increase in accordance with the efforts of the international community to realize carbon net zero. Microgrid is an electrical grid consisting of a small power system that is independent from a large power system. Microgrid can be operated independently from the electrical grid because it consists of power consumers, energy sources, energy storage devices and energy management systems. Also, It can be connected to and operated with the large scale power systems.

The international standards for microgrid developed and established by ETRI this time are 2 items; the requirements and use cases for using energy storage systems in power peak management and emergency power support, and the framework of demand response (DR)-based energy management system for industrial facilities such as factories.

Among the essential elements of the microgrid, the energy storage system stores the produced energy and then discharges the energy when electricity is not generated in the renewable energy sources or the amount of energy demand exceeds the pre-defined threshold to maintain a stable operation of microgird power systems. This prevents the waste of excess energy and enables the stable and efficient energy use.

The research team developed an energy management system standard for industrial facilities interconnected to a microgrid predicts demand response through electricity usage data such as power consumption pattern and local power supply plan. It is expected that manufacturers will be able to use the standard to effectively manage electricity charge or electricity demand.

Shin-Gak Kang, head of ETRI’s Standards&Open Source Research Division, said, “Carbon net zero technology is actively being developed throughout the world to mitigate the climate change. It is a very significant achievement to develop the international standards lead by a korean research team that are crucial for realizing carbon net zero in microgrid. We will further contribute to constructing the intelligent and efficient electricity market by tightly integrating the energy storage systems with smart grids in the future.".

1) Smart Grid : A next-generation power grid that increases energy efficiency by adding ICT to the existing power grid, exchanging information on power production and consumption in both directions and in real time. A smart grid is more efficient than current power systems designed to produce about 15% more for unexpected power demand.

This research was conducted through the research project 'Establishment of the foundation for international microgrid standardization' supported by the Korea ministry of trade, Industry and Energy and the Korea Institute of Energy Technology Evaluation & Planning.

Funder
Ministry of Science and ICT 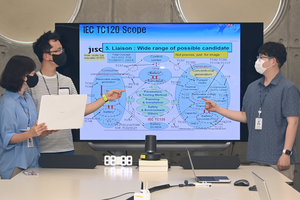