Researchers at Nanyang Technological University, Singapore (NTU Singapore) and Tan Tock Seng Hospital (TTSH) have developed a wearable assistive robot that can detect and prevent a fall before it happens, reducing the user’s risk of sustaining injuries.

The development of the robot, which can also be used to aid patients’ rehabilitation from their injuries, was catalysed by the National Robotics Programme, a multi-agency national programme that looks at the end-to-end development of differentiating robotics enablers and solutions in Singapore, from funding R&D to facilitating partnerships for translation and adoption to maximise socio-economic impact.

Called the Mobile Robotic Balance Assistant or MRBA (pronounced ‘Mister-Bah’), the robot uses its inbuilt sensors to instantaneously detect a loss of balance and catches the user with its attached safety harness which is worn around the user’s hips.

The device would also help users who have difficulty in walking and balancing to stand up safely from a seated position, and to sit down safely from a standing position. It also uses a depth-sensing camera to observe the user’s movements, while its machine-learning algorithms estimate the balance state of the user in real time to better predict any future imbalances or falls.

The human balance control system degenerates with age. This is exacerbated by conditions such as neurological diseases and injuries, musculoskeletal problems like ankle sprains, scoliosis, or missing limbs, as well as vertigo. This loss of balance control often results in falls, especially in the elderly.

According to the World Health Organisation, falls are the second leading cause of death from accidental or unintentional injuries worldwide[1]. In Singapore, falls account for 40 per cent of injury-related deaths[2].

Intended for use with minimal caregiver help in both institutional and home settings, it can assist people with limited or reduced mobility in day-to-day tasks, such as entering and exiting elevators, opening doors, getting dressed, performing simple kitchen chores and tasks such as watering plants.

MRBA was co-developed by a team of researchers, engineers, and data specialists at the Rehabilitation Research Institute of Singapore (RRIS), alongside clinicians and researchers at TTSH. RRIS, which is hosted at NTU’s Lee Kong Chian School of Medicine, was founded in 2016 by NTU Singapore, the Agency for Science, Technology and Research (A*STAR) and the National Healthcare Group (NHG).

In clinical trials involving 29 participants, including patients who suffered from stroke, traumatic brain injuries, and spinal cord injuries, the researchers found that MRBA was successful in aiding them with sitting, standing, and walking, as well as assisting in tasks like fetching water. No falls were recorded in the trials, which spanned three days per participant.

The technology presents an improved tool to help in the care of Singapore’s ageing population, reflecting both NTU's and TTSH’s commitment to using technology and innovation to respond to the needs and challenges of healthy living and ageing, which is one of four humanity’s grand challenges that the University seeks to address through its NTU 2025 strategic plan.

Associate Professor Ang Wei Tech, Executive Director of RRIS, who supervised the project’s development, said: “MRBA could prove to be an invaluable resource for older adult users, and help promote independent living and aging. The development of the robot was as result of a fruitful collaboration with TTSH, blending our expertise in engineering and machine learning with their strengths in rehabilitation and medicine.” Assoc Prof Ang is also from NTU’s School of Mechanical and Aerospace Engineering.

Adjunct Associate Professor at NTU’s Lee Kong Chian School of Medicine Karen Chua, and Senior Consultant at TTSH’s Department of Rehabilitation Medicine, one of the co-leads of the MRBA’s development said: “One of TTSH’s key strategies is to empower patients with greater access to innovative robotic rehabilitation. We want to make robotics therapies more sustainable and accessible in the community where our patients can lead healthier and happier lives. The RRIS team’s innovative spirit and clear understanding of clinical needs have made them wonderful partners in developing this technology to support more people to live independently. In the near future, we look forward to seeing the MRBA improved to an industrial prototype with a software data platform that prepares it for commercialisation.”

MRBA’s success in the clinical setting has resulted in interest from Ninkatec and Home Instead, two Singapore home-care providers. The research team has also filed four patents for the technology with NTUitive, NTU’s innovation and enterprise company.

An everyday robotic assistant with a myriad of uses

MRBA comes in three models. The first model caters to users that weigh up to 80 kilograms, while the second assists those who weigh up to 120 kilograms. The third version, the Agile model, supports more dextrous movements.

In addition to assisting users in daily living, the robot can also support physiotherapy consultations by assisting those recovering from injuries to carry out key rehabilitation exercises, such as side stepping, balancing on a rocker board, and standing on one leg. In providing such balance support, users feel more confident in going about their daily activities, including sports, such as bouncing and throwing a basketball, kicking a soccer ball, and even playing badminton.

The research team hopes to expand the study and recruit 71 more participants from day rehabilitation centres to further build the use case for the robot in home and community settings.

The RRIS team is also working with industry partners to commercialise the MRBA within the next year, for the robot to serve people who require such balance and assistive solutions.

Ranked amongst the world’s top universities, the University’s main campus is also frequently listed among the world’s most beautiful. Known for its sustainability, over 95% of its building projects are certified Green Mark Platinum. Apart from its main campus, NTU also has a medical campus in Novena, Singapore’s healthcare district.

About the Rehabilitation Research Institute of Singapore

RRIS was founded in 2016 by NTU Singapore, the Agency for Science, Technology and Research (A*STAR) and the National Healthcare Group (NHG).

RRIS aims to develop data-driven and patient-centric health solutions to prioritise the quality of care for Singapore’s rapidly ageing population, which is vulnerable to immobilising diseases and disabilities like stroke and knee osteoarthritis.

Tan Tock Seng Hospital (TTSH) is the flagship hospital of the National Healthcare Group and part of Singapore’s Public Healthcare System. As a pioneering hospital with strong roots in the community for over 178 years, TTSH is recognised as the People’s Hospital, serving a resident population of 1.4 million living in Central Singapore. Together with 70 community partners and 80 community health posts, it brings care beyond the hospital into the community as an integrated care organisation – Central Health.

As one of the largest multi-disciplinary hospitals in Singapore, TTSH operates more than 1,700 beds with centres of excellence including the National Centre for Infectious Diseases (NCID), Institute for Geriatrics & Active Ageing (IGA), NHG Eye Institute (NHGEI), and TTSH Rehabilitation Centre.

NRP is a programme that was established in 2016 as part of our RIE (Research, Innovation and Enterprise) initiative. It aims to catalyse differentiated robotics capabilities in Singapore through the funding of use-inspired research and use-driven development.  NRP also leverages the projects it funds to grow our robotics talent pool and nurture a vibrant local ecosystem.

For more information, visit the NRP website or the NRP LinkedIn page.

[2] Singapore Medical Journal. Approach to falls among the elderly in the community (2020). 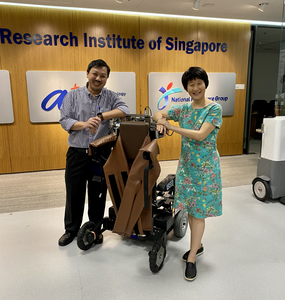