Woods Hole, MA (September 7, 2022) – A new study led by scientists at Woods Hole Oceanographic Institution (WHOI) and University of Washington Applied Physics Laboratory (UW APL) finds that marine predators, such as tunas, billfishes and sharks, aggregate in anticyclonic, clockwise-rotating ocean eddies (mobile, coherent bodies of water). As these anticyclonic eddies move throughout the open ocean, the study suggests that the predators are also moving with them, foraging on the high deep-ocean biomass contained within.

The study included collaborators from the National Oceanic and Atmospheric Administration’s (NOAA) Pacific Islands Fisheries Science Center. It focused on more than 20 years of commercial fishery and satellite data collected from the North Pacific Subtropical Gyre - a vast region that is nutrient-poor but supports predator fishes that are central to the economic and food security of Pacific Islands nations and communities.

The research team assessed an ecologically diverse community of predators varying in latitudes, ocean depths, and physiologies (cold vs. warm-blooded).

Although there is a growing body of research showing that diverse predators associate with eddies, this is the first study to focus on the subtropical gyre - which is the largest ecosystem on Earth. The research team was able to investigate predator catch patterns with respect to the eddies, concluding that eddies influence open ocean ecosystems from the bottom to the top of the food chain. This discovery suggests a fundamental relationship between predator foraging opportunities and the underlying physics of the ocean.

“The idea that these eddies contain more food means they’re serving as mobile hotspots in the ocean desert that predators encounter, target and stay in to feed,” said Arostegui.

Scientists have long studied isolated predator behaviors in other regions of the ocean, tagging animals and tracking their dive patterns to food-rich ocean layers, such as the ocean twilight zone (mesopelagic); but an understanding of how eddies influence behavior of open ocean predators, specifically in food-scarce areas like subtropical gyres should inform effective management of these species, their ecosystems and dependent fisheries.

This study’s findings highlight the connection between the surface and deep ocean, which must be considered in impact assessments of future deep-sea industries. As deep-sea prey fisheries continue to expand, there comes the need for more information on deep-sea ecology, particularly how much deep-prey biomass can be harvested by fisheries without negatively affecting dependent predators or the ocean's ability to store carbon and regulate the climate. A better understanding of the ecosystem services provided by the deep ocean via eddies, particularly with respect to predator fisheries, will help inform responsible use of deep-ocean resources.

“The ocean benefits predators, which then benefit humans as a food source,” Arostegui said. “Harvesting the food that our food eats, is something we need to understand in order to ensure the methods are sustainable for both the prey and the predators that rely on them. That is critical to ensuring both ocean health and human wellbeing as we continue to rely on these animals for food.”

Woods Hole Oceanographic Institution is a private, non-profit organization on Cape Cod, Mass., dedicated to marine research, engineering, and higher education. Established in 1930 on a recommendation from the National Academy of Sciences, its primary mission is to understand the oceans and their interaction with the Earth as a whole, and to communicate a basic understanding of the oceans’ role in the changing global environment. For more information, please visit www.whoi.edu. 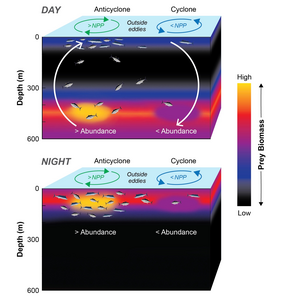