White-necked jacobin hummingbirds sport a colorful blue-and-white plumage as juveniles. When they grow into adulthood, males retain this dazzling pattern, while females develop a more “muted” palette of green and white — at least, most females. Curiously, about 20% of females defy the norm and retain male-like plumage into adulthood.

“Why do some female jacobins look like males? It’s a mystery made up of multiple pieces,” said Jay Falk, a postdoctoral researcher at the University of Washington. “Is there a benefit? Is there a cost? Is it just appearance, or do these females also act like males?”

Now those pieces are falling into place. In research published Sept. 7 in the Proceedings of the Royal Society B, Falk and co-authors at the UW, Cornell University and Columbia University report that adult female white-necked jacobins with male-like plumage are mimicking male appearance — but not male behavior. In addition, their strength and body size are similar not to males, but to fellow females with muted plumage.

The study shows that the 1 in 5 adult females with male-like plumage are engaging in “deceptive mimicry”: They are essentially trying to pass themselves off as males, without acting like them. In the process they receive quite a benefit. As Falk and his colleagues reported in a paper published last year in Current Biology, females with male-like plumage suffer less aggression from males compared to females with the more typical muted plumage, and can hang out longer at feeders.

Falk began this research as a graduate student at Cornell University and continued it as a postdoctoral fellow with co-author Alejandro Rico-Guevara, a UW assistant professor of biology and curator of ornithology at the UW’s Burke Museum of Natural History & Culture.

White-necked jacobins are common in tropical lowlands of the Americas. Males of this species, put simply, are bullies. They defend territories, chase rivals away from food sources, court females and fight. That aggressive behavior relies on an underlying difference in body size and physiology: Male jacobins are larger and are better at combative flight compared to dull-colored females.

An unanswered question from Falk’s previous study was whether females with male-plumage also displayed male-like flight power or behavior. At a field site in Panama, he briefly captured male jacobins and females with both types of plumage. He discovered that females — regardless of plumage — had essentially identical body and wing sizes, whereas males were slightly larger. Before releasing the birds, Falk also tested their “burst power” — or muscle capacity during flight — by seeing how high they could fly while lifting a chain of small, weighted beads. Females of both types of plumage had identical burst power, while males could lift more on average.

Using data from radio-tagged birds in the wild, the team also discovered that more males fed in a “territorial” pattern — spending longer amounts of time at a smaller number of feeding sites. All females, regardless of plumage, showed the opposite pattern: feeding for shorter periods of time at sites across a larger territory.

“Females with male-like plumage don’t seem to be behaving any differently than other females,” said Falk. “All evidence instead indicates that females that look like males are engaging in deceptive mimicry.”

Many examples of deceptive mimicry occur between species: a harmless species will mimic the coloration of a noxious species as an anti-predator defense. In the Americas, for example, some non-venomous kingsnake species have evolved colorful banding patterns that resemble venomous species in the same area, such as coral snakes. Research showed that this deceptive mimicry decreased predation of the kingsnakes, which are not venomous. What Falk and his colleagues found in white-necked jacobins appears to be an example of deceptive mimicry within a species.

Scientists have reported females with male-like plumage in other hummingbird species. If so, male mimicry within hummingbird species may be more common than currently known. Next year, Falk will move to the University of Colorado Boulder to study the genetic differences between females with muted and male-like plumage — and potentially identify how this deception evolved.

But differences between the sexes are not the whole story.

“Even when I found average differences in female and male morphology, burst power or behavior, I also found quite a bit of overlap between the sexes,” said Falk. “That indicates that sex isn't the only important factor, and that variation among and between individuals plays an important role.”

Falk and Rico-Guevara are currently studying the role of individual variation in these traits, regardless of sex.

Additional co-authors on the study are Michael Webster of Cornell University and Dustin Rubinstein of Columbia University. The research was funded by Smithsonian Tropical Research Institute, National Science Foundation, Cornell University, the Walt Halperin Endowed Professorship at the UW, the Washington Research Foundation, the Society for the Study of Evolution and the American Society of Naturalists. 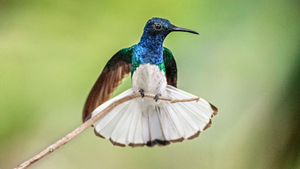 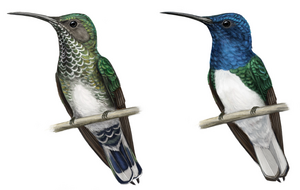 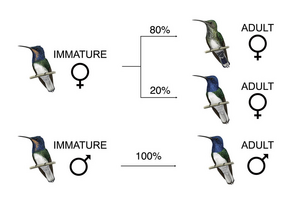