The electrical grid faces a mounting barrage of threats that could trigger a butterfly effect – floods, superstorms, heat waves, cyberattacks, not to mention its own ballooning complexity and size – that the nation is unprepared to handle, according to one West Virginia University scientist.

But Anurag Srivastava,  professor and chair of the Lane Department of Computer Science and Electrical Engineering, has plans to prevent and respond to potential power grid failures, thanks to a pair of National Science Foundation-funded research projects.

“In the grid, we have the butterfly effect,” Srivastava said. “This means that if a butterfly flutters its wings in Florida, that will cause a windstorm in Connecticut because things are synchronously connected, like dominos. In the power grid, states like Florida, Connecticut, Illinois and West Virginia are all part of the eastern interconnection and linked together.

“If a big event happens in the Deep South, it is going to cause a problem up north. To stop that, we need to detect the problem area as soon as possible and gracefully separate that part out so the disturbance does not propagate through the whole.”

With more than $1.3 million in combined funding, Srivastava and researchers are tackling two convergent studies aiming to transform power grid crisis response. One includes a major grant from the NSF’s Future of Work at the Human-Technology Frontier program and the other is a joint project grant awarded by the NSF and the German Research Foundation.

One study focuses on aDaptioN: a software that’s capable of working with non-centralized information from all over the grid to make, in some cases, its own decisions about the right response to a problem in the power network. The other study develops an advanced tool to train human grid operators to cope with vast quantities of information and to track whether they’re entering information overload.

Srivastava’s research will enable flexible, precise, and rapid responses from both network infrastructures and human grid operators in crisis situations. It starts with his development of the aDaptioN software. The name refers to “data-driven secure holonic control and optimization for the networked cyber-physical system.”

When faced with a potential threat, the aDaptioN software will autonomously isolate and quarantine problematic portions of the grid, preventing those sections from spreading chaos. In addition, aDaptioN will use distributed intelligence sharing to protect against cyberattacks, sealing a major hole in national security preparedness.

The U.S. grid is far more complicated than it was a few decades ago, something Srivastava attributes to the competitive electricity market created in the late 1990s and to the rise in small-scale power sources like home solar panels and electric vehicle charging stations, both of which have tangled the paths power takes from plant to substation to consumer.

Intelligently controlling the tidal wave of information produced at multiple points across the grid would be a game changer, and while aDaptioN is part of making that happen, there’s another, equally crucial step. Srivastava’s team will create the Grid Operation Lab in Evansdale, a state-of-the-art cyber-physical-human system simulation lab that will be a functioning, scaled model of a power grid control room.

In a training and testing process inspired by spacecraft flight simulators, the operators will be hooked up to and surrounded by sensors that gauge their cognitive performance by tracking their skin’s electrical responses and eye movements. Srivastava and his team will ascertain the conditions under which an operator’s alertness diminishes and fatigue sets in.

Grid operators must maintain an unrelenting intensity of focus on vast streams of data. To maintain continuity of awareness, Srivastava said, operators typically work 12-hour shifts. Each operator works at a specific desk with a unique responsibility.

“Someone may focus on the flow of power from state to state,” Srivastava said, “while someone focuses on voltage levels. Someone else is constantly doing what we call ‘security analysis’ – running ‘what if?’ scenarios. They all need to talk to each other and their neighbors in other control rooms any time they see a problem.”

As the operators enact their roles in the simulations, Srivastava will track their responses to the flow of information. He’ll fine-tune the tracking and analysis on the students first, then bring in 30 experienced professional operators to work with collaborators and validate the technology.

Whether it’s a wildfire, cyberattack, fuel supply shortage or winter storm, Srivastava knows the next U.S. power grid crisis will trigger a high-speed cascade of alarms, cross-communications, automated shutdowns and uncoordinated individual responses. That scenario will play out very differently, he believes, once his research has led control grid operators to the eye of the information storm.

As threats to the US power grid surge, WVU professor develops advanced solutions for human-machine coordination 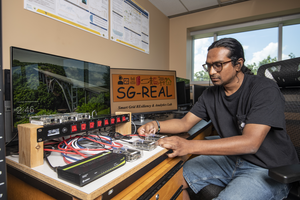 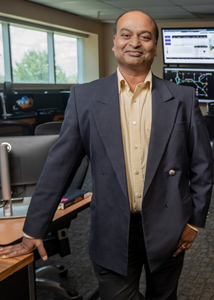