Paleontologists at the University of Tübingen’s Senckenberg Centre for Human Evolution and Palaeoenvironment have discovered a hitherto unknown genus and species of dinosaur.

Tuebingosaurus maierfritzorum lived about 203 to 211 million years ago in the region now known as Swabian Alb and was a herbivore. The new species displays similarities with the large long-necked dinosaurs known as sauropods, and was identified when already-known dinosaur bones were re-examined. The results have been published in the open-access, peer-reviewed scientific journal Vertebrate Zoology.

The fossils, which are part of Tübingen’s paleontological collection, were previously interpreted as belonging to the family Plateosauridae. Now, in a large-scale project, scientists Dr. Omar Rafael Regalado Fernandez and PD Dr. Ingmar Werneburg have re-examined all dinosaur bones stored in Tübingen. Most of the fossils originate from a quarry near Trossingen at the edge of Swabian Alb, where many dinosaur bones found since the 19th century have frequently been classified as Plateosaurus.

While it is undisputed that this group of dinosaurs was very common in parts of Europe about 200 million years ago, contemporary paleontologists are well aware that taxonomical classification in the past was often inaccurate, with some discoveries being too rapidly attributed to the Plateosaurus genus.

When they re-analyzed a skeleton that was discovered in Trossingen in 1922, consisting mainly of the rear of the body, Regalado Fernandez and Werneburg established that many of the bones were not the same as a typical Plateosaurus.

For instance, the partial skeleton displayed, among other derived characters, demonstrates broader and more strongly-built hips with fused sacral vertebrae, as well as unusually large and robust long bones. Both features imply locomotion on four legs. This is unlike the plateosaurid dinosaur, which - although resembling the long-necked sauropods from the Jura region - likely moved on only two legs.

Following in-depth comparison of all anatomical characteristics, the scientists re-categorized the partial skeleton from Trossingen in the dinosaur tree of life and established that they had discovered a previously unknown species and genus.

It is highly probable that the newly described Tuebingosaurus maierfritzorum was a quadruped, hence, far more closely related to more recently lived large sauropods, such as Brachiosaurus or Diplodocus.

The surrounding sedimentary rock and the preservation of the bones indicate that this Tuebingosaurus had sunk into a swamp and died. The bones on the left side of the body were probably on the surface and exposed to the elements for several years.

“Its genus name, Tuebingosaurus, is a homage to our beautiful university city and its inhabitants,” says Werneburg.

The new species was described in the latest edition of the Senckenberg Natural Science Society’s journal Vertebrate Zoology, which comprises a special volume, paying tribute to Wolfgang Maier on the occasion of his 80th birthday.

In summary, with their project, the scientists demonstrate that the early European dinosaurs were far more diverse than previously thought.

After completing the study of the skeleton of the newly discovered species Tuebingosaurus maierfritzorum, the bones were put back together and can already be seen in two large display cabinets in the Tübingen’s paleontological collection.

There, amongst the thousands archaeological finds, the visitors can also find two complete Plateosaurus skeletons from Trossingen, partial skeletons of two sauropods and one stegosaur from Tanzania.

A new massopodan sauropodomorph from Trossingen Formation (Germany) hidden as 'Plateosaurus' for 100 years in the historical Tübingen collection. 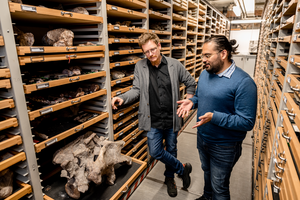 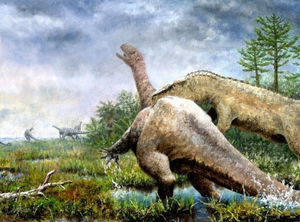 Reconstruction of the possible death of the studied specimen