Scientists have solved the century-old mystery of a supergene that causes efficient cross-pollination in flowers. The results show that sequence length variation at the DNA level is important for the evolution of two forms of flowers that differ in the length of their sexual organs. The study is published today in Current Biology.

Gardeners and botanists have known since the 1500s that some plant species have two forms of flowers that differ reciprocally in the length of their male and female sexual organs. Darwin first proposed that such distylous flowers promoted efficient cross-pollination by insect pollinators. Early geneticists showed that the two forms of flowers were controlled by a single chromosomal region likely harboring a cluster of genes, a supergene. But until recently this supergene had never been sequenced.

Surprisingly, they found that the supergene responsible for differing lengths of male and female sexual organs itself varied in length. Specifically, the dominant form of the supergene contained about 260 000 base pairs of DNA that were missing from the recessive form. The 260 000 base pair stretch of DNA harbored several genes likely to cause length variation in sexual organs.

”These results were really surprising to us, because a similar genetic makeup of the supergene that governs distyly has previously been identified in another system, primroses, where it evolved completely independently,” said Tanja Slotte, Professor in Ecological Genomics at Stockholm University and senior author of the study.

”Not only has evolution repeatedly led to similar variation in the flowers of primroses and flaxseed species, it has also relied on a similar genetic solution to achieve this feat,” said Juanita Gutiérrez-Valencia, PhD student at Stockholm University and first author of the study.

These findings provide new insights into the exceptional power of evolution to find convergent solutions to widespread adaptive challenges such as the need for flowering plants to be cross-pollinated.

The long and short of a supergene for efficient pollination 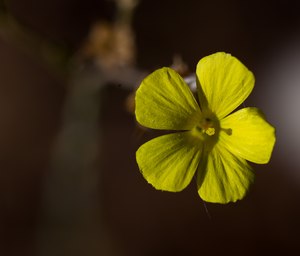 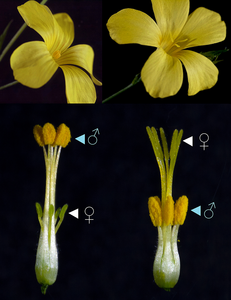