Kyoto, Japan -- Parents and pundits may no longer argue that gamers are indulging in brainless activities in front of their screens. And gamers may finally feel a sense of vindication.

Kyoto University and BonBon Inc, a Kyoto-based healthcare-related IT company, have now teamed up to show that multiple cognitive abilities may be empirically measured from a complex game experience depending on the game's design.

"Video games can be made to engage and characterize distinct cognitive abilities while still retaining the entertainment value that popular titles offer," says Tomihiro Ono, lead author of the joint study in Scientific Reports.

He adds, "For example, we found that there are in-game micro-level connections such as between stealth behavior and abstract thinking, aiming and attention, and targeting and visual discrimination."

To make these connections between complex gameplay and interpretable cognitive characteristics, the team combined the use of data from Potion, a 3-D action video game by BonBon Inc, and WebCNP, conventional cognitive tests maintained by the University of Pennsylvania.

Although existing literature and general beliefs regarding similar action video games already suggest the advantage that younger males may have over other demographic groups, the researchers did not expect to obtain measurements reflecting stark differences even after accounting for gaming experience.

"The lack of a connection between cognitive abilities and video game elements in aged players came as a surprise," Ono notes.

To attain more scientific insight into the psyche of gamers, such as in why computer games have positive influences on some players, the researchers posit that studies using games ought to avoid one-size-fits-all approaches, as demographic factors and game experience can be assumed to affect results.

"We think that a granular understanding of cognitive engagement in video games has potential in benefitting such research areas as psychiatry, psychology, and education," concludes the author.

Gamers can have their cake and eat it too 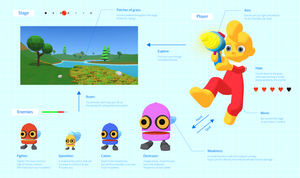