Researchers at Princeton Chemistry have discovered a biosynthetic pathway that incorporates selenium into microbial small molecules, marking the first time such atoms have been uncovered in natural products, and opening new avenues in selenobiology.

The research also strongly suggests that selenium, an essential trace element across all kingdoms of life, may have a more important biological role in bacteria than scientists originally assumed.

The lab’s paper, “Biosynthesis of selenium-containing small molecules in diverse microorganisms,” was authored by Chase Kayrouz, a fourth-year graduate student in the lab; postdocs Jonathan Huang and Nicole Hauser; and Mohammad Seyedsayamdost, professor in the Department of Chemistry.

“This was kind of a closed field. Nobody had found a new pathway in selenium metabolism in 20 years,” said Kayrouz. “The biosynthesis of selenoproteins and selenonucleic acids were elucidated in the ‘80s and ‘90s. And since then, people kind of assumed that these are the only things microbes do with selenium. We simply wondered whether they might incorporate selenium into other small molecules? Turns out, they do.”

Said Seyedsayamdost: “Our work shows that nature has indeed evolved pathways to incorporate this element into small molecules, sugars, and secondary metabolites. Selenium has remarkable properties that are distinct from those of any other element found in biomolecules. Incorporation of selenium into selenoneine, for example, makes it a much better antioxidant than the sulfur version of the molecule. But while sulfur is ubiquitous in biomolecules, the occurrence of selenium is much rarer and was thought to be limited to biopolymers.

“Nature has evolved specific mechanisms for incorporating either sulfur or selenium into natural products, thereby taking advantage of the unique properties of both elements through pathways that are specific to each.”

The lab started their investigation under the assumption that selenium atoms should exist in natural products because of their utilization ubiquity elsewhere. They asked, what would such a signature look like in microbial genomes?

“How do you actually see where a new drug or natural product or selenium metabolite is, how do you find it?” said Kayrouz. “We typically look for biosynthetic gene clusters – groups of genes on the chromosome that code for the biosynthesis of such molecules. So, if we have a pathway to make a selenium-containing compound, it has to be encoded by genes.”

They implemented a genome mining strategy in search of genes that are found next to selD, which encodes the first step in all known selenium processes inside the cell.

Fairly quickly, they found one gene that was co-localized with selD—called senB—that caught their attention, particularly because it has not before been implicated in selenium metabolism.

“First, we defined what a biosynthetic gene cluster that incorporates selenium would look like,” said Seyedsayamdost. “We then used bioinformatics to look for such genes and identified what we now call the 'sen cluster' in diverse microbial genomes.”

They were able to express each of these new genes in Escherichia coli, thus assembling the entire pathway in a test tube. This revealed production of two selenium-containing small molecules – a selenosugar and a molecule called selenoneine. It also revealed two enzymes that form carbon-selenium bonds, the first such enzymes to act on biological small molecules.

“The microbes are putting selenium into these compounds for a reason, so there must be some interesting bioactivity associated with them,” said Kayrouz. “We don’t know what that is yet, but it is extremely exciting. As biological chemists, discoveries like this are what we wake up for every day.”

“Biosynthesis of selenium-containing small molecules in diverse microorganisms,” was authored by Chase Kayrouz, Jonathan Huang, Nicole Hauser, and Mohammad Seyedsayamdost. This research is supported by a National Science Foundation CAREER Award (No. 1847932 to M.R.S.), and the National Institutes of Health (GM129496) as well as the Edward C. Taylor 3rd Year Fellowship in Chemistry, the Life Sciences Research Foundation Postdoctoral Fellowship, and the Swiss National Science Foundation Postdoctoral Fellowship. 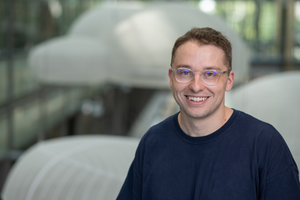