NuSense Technology — High Spatial Resolution Optical Sensors for Harsh Environments, an innovation developed through a collaboration between the University of Pittsburgh Swanson School of Engineering with the U.S. Department of Energy National Energy Technology Lab (NETL) as co-developer, was one of the recipients of the prestigious 2022 R&D 100 Award from R&D Magazine.

Four patents1 are the foundation for the NuSense technology, a distributed optical fiber system designed to function in the extreme environments with extreme radiations, high temperatures, and highly reactive gas atmosphere. Because of this ability, the sensors can also be used to monitor structural health in critical energy production systems such as gas turbines, nuclear reactor, boiler tubes, reactor coolant pipes, hydrogen gasifier, or core containment vessels. These measurements provide valuable early warnings before accidents or breakdowns occur.

Principal investigator and lead developer is Kevin P. Chen, the Paul E. Lego Professor of Electrical and Computer Engineering at the Swanson School. NETL scientists whose work contributed to this innovation are Michael Buric and Paul Ohondicki. Buric, an ECE alumnus and a former doctoral student with Chen, is the NETL research lead. Paul Ohodnicki is a former NETL research scientist and now associate professor of mechanical engineering and materials science at the Swanson School.

“Our collaboration with Kevin Chen’s group at Pitt has created a new tool to improve safety and operating efficiency for nuclear energy, hydrogen fuel cells and other systems, which are crucial to achieving our nation’s goals for a carbon-free power sector by 2035 and a net-zero carbon emissions economy by 2050,” said NETL Director Brian Anderson.

Nuclear reactors and other energy-producing systems are notoriously difficult to measure during operation due to their harsh environments. Using proprietary high-temperature glass sealant packaging and other advanced technologies, NuSense sensors can perform dynamic strain measurements at unprecedented high temperatures that no current commercial strain sensor can reach.

Established in 1962 and often referred to as “The Oscars of Innovation”, the R&D 100 Awards is the only science and technology awards competition that recognizes new commercial products, technologies, and materials for their technological significance that are available for sale or license.

“It is exciting to receive this recognition. This achievement is derived from strong and unique fiber sensor capability we built here over a span of more than a decade and is a group effort," noted Chen. "I really have to thank to my students, postdoctoral researchers, and our collaborators from national labs and industry. This R&D 100 award provide additional incentive for us to transition this technical innovation to industry applications to support America’s new energy revolution. Pittsburgh is a perfect place to do so.”

The R&D 100 awards will be presented November 17 in San Diego, California. 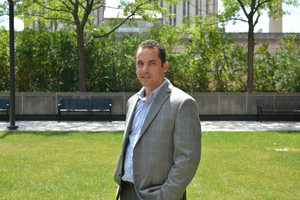